I’m getting back in the groove this week of being back to work. My muscles aren’t super sore from head to toe this week like they were last week with first coming back – that was a terrible feeling and all I had energy for when I got home from work was a hot shower and just resting. My knees however are still really bad. I’m up a few pounds though (I fluctuate in any given month when I’m maintaining and not losing in about a 10lb range and when I’m at the high end of the fluctuation, my knees really feel it). In pandemic news this week, the only thing I’ve seen is they’ve announced that they’re going to start opening up the borders in a few weeks for fully vaccinated people for non essential purposes.  Looks like the world is slowly opening – fingers crossed it can keep opening and we don’t get into a fourth wave situation that sends us backwards again. 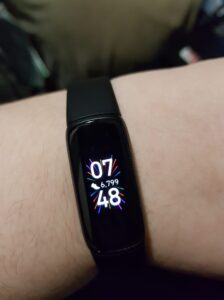 In the same thought above of my knees hurting, I decided to get myself a Fitbit!  The best part about it is it didn’t cost me a cent out of pocket.  My credit card is one that gives Canadian Tire dollars as incentive for using it and I’ve been building for a few years. They’ve partnered with a few stores where you can collect and redeem them and one of those stores is Sport Chek.  I figure it’ll be good seeing stats and seeing how much I’m really moving (or not) and being able to slowly increase and have numbers to go off of is a good thing.  I’m very much a numbers girl, so I think this will be a good thing to help.  Speaking of moving, every single day I’ve walked a bus stop or two before getting on the bus, just to get that extra bit of movement in. It also tracks sleep – which is another area you all know I can struggle with at times.  The one I got also has tracking for both mindfulness and my monthly cycles, along with moods. This may get a little TMI, but I’m all about being real with you.  My cycles have always been terrible, with having PCOS – but I’ve never taken the time to actually track how long and heavy it is or how much I spot in between. I’m interested to see what it ends up looking like.

Speaking of sleep, it’s been really good since I’ve started back to work.  Just as I predicted, being back in a routine and having a reason to wake and get out of bed each day.  As well as being more active, just for being out of the house more and walking around the building and to and from transit is more than I was doing while home all these months (with the exception of those occasional work outs I was doing). I even was so exhausted one night that I went to sleep earlier than normal – I know part of that is the aforementioned cycle about to start and I always get more exhausted then.  So the combo of that along with work and moving my body more has made me so sleepy.

Food is going well.  I’m bringing those healthy foods with me to work, so my snacks are all things good.  This week has been fruit, yogurt and pistachios.  I’m putting veggies on my sandwiches to round it out and making sure there’s some kind of protein on it to help make me feel full and I’m good to go till I get home for dinner.  I’m not much of a breakfast person, so the snacks help round it out. I can track all of it in the Fitbit too.  We ended the week going to Wendy’s (actually ate in restaurant for the first time since the pandemic started) and I made the choice of a taco salad instead of a combo and just grabbed a jr cheeseburger to have with it. Much better choice than a big burger and fries.  I am however a bit of an evening snacker, so that’s something I need to work on, but the day has been going super well.

The small biz reality has sunk in and shock has worn off about the blindside they did to us.  I’m still up in the air deciding what I’m going to move to next, but I miss having that to do – so I’m definitely going to be starting with something new.  I just need to make the decision of what to go to.  Definitely something to do with pretty nails as that’s always been my go to thing.  I’ve been quiet about it in my VIP group and have only been posting self care things so I decided to go live and chat about what happened and where my head’s at with trying something new.  Just like I’m real here with my blogging, I like to be real and transparent there in my group too.  I’ve still been keeping the group going with just self care goodness, but I’m taking my time deciding what I’m going to jump into next because there are a few I’m considering.  I’d love to do them both as they both offer different items from each other, but they’re in the same hand/nail/foot space and unfortunately have non compete for same space products – so I need to choose.

I’ve ended the week by looking into adding DDP yoga to my movement routine, but I’ll speak more on that next week as I’m getting tired and don’t have the energy to write about it tonight in time to get this post out.