As expected – since stage 3 reopening, the numbers are trending a little upwards as this week is coming to an end.  It’s still small numbers, but they are slowly increasing from where they got to in stage 2.  I was just seeing on the news that Ontario has over 200 cases when we had gotten down to the low 100’s.  Of those 200, today Toronto had 40 of them.  I’m hearing about the breakthrough cases of people who are fully vaccinated and that just makes me continue to be really careful and keep wearing the mask when with anyone who doesn’t live with me.  I finally don’t have anxiety just for leaving the house anymore, but it still stresses me when I’m around others who aren’t following the mask mandate.

I ended last weeks blog saying that I’m checking out DDP yoga.  I’ve got a few friends who I keep see posting updates of their progress and have gotten inspired.  There are either DVD’s you can get, or an app.  There is a 1 week free trial on it, so I figured why not try it out – and I fell in love! I’ve now signed up for a year (there was a 20% off coupon – it ended up being $86US for the year, cheaper than a gym membership). I love how the app has spots to track your weight, measurements, pictures and pain levels at various places on your body. They’ve got programs starting from in bed, in a chair, standing with chair support, beginner, intermediate, advanced, extreme and jacked.  With how bad my knees are, I’ve started with the chair one – but I’m very much accelerating the program.  They’re always saying to make it your own and you can edit the week to put which work outs you want to do on which days and how frequent you want, as well as how many you want.  The program is set up with 3x/week and each week increases the difficulty of the work out.  I’ve edited mine to be every day and am already enjoying the 4th week level of work outs – as well as doing more than 1 on some days.  I predict that it’ll be soon that I’m going to move to the next level of standing with chair support, I just want to get the muscles around my knee a little stronger.

With just having done now 9 days straight, I can feel my flexibility getting better already and the pain in my knees is subsiding a little (it’s still there though).  I’m really excited to see where this is going to take me.  I’ve joined the facebook group as well and there are so many inspiring stories and I can’t wait to be one of them.  If you didn’t know, I’m not a morning person – yet I’ve been waking a few minutes early before work to get it done and start my day with the movement.  I just know that I’m the type of person that when I get home from work, I don’t want to do anything – so getting it done before is definitely a game changer for me.

In addition to the yoga, I’ve also been walking.  I’m totally embarrassed to say just how out of shape I’ve gotten.  I struggle with my knees and lower back seizing up on me when I walk about 10 minutes. I’m feeling grateful that where I’m walking is along bus routes and there are benches in bus shelters that I can stop every so often and sit for 2 minutes before continuing. I’m feeling super proud of myself for continuing and not just quitting.  Every day after work I’ve been walking from 20-45 minutes before getting on the bus to go home.  Now that I’ve got the fitbit, I’m making sure I hit at least 5k steps a day (where without doing that extra walking, I was lucky if I cracked 2-3k in a day). As I get stronger, I’ll increase it – but right now, it’s definitely a work out for me to do.  I’m impressed with myself that I actually got dressed and went walking even on the weekend!

I really can’t wait to get to the point that I can move without pain and feel healthier. I’m tired of feeling so sluggish and bloated.  I love that right now I have a ton of drive and motivation to actually act on it to do something about it.

Well, I’m glad that I had made the decision to not continue with juvenaé when they re-open as affiliate only because I learned this weekend that when they re-open, it’s not going to include Canada.  This makes me even more pissed off at the company for what they did and how they did it.  It feels so shady and unethical that they even bothered to launch in Canada just a few weeks before they pulled the plug.  It just feels like they used us to sell that little bit more product by having people join and buy the kits. They had to have known they were in discussions of changing to affiliate when they launched. 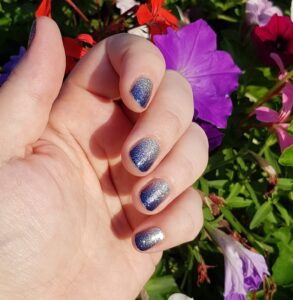 I still haven’t chosen the nail company I’m going to join yet, but this week I did my nails with Color Street lacquer strips and have had them on a full week and I have to say I’m really impressed with them. I’m not seeing any chipping or lifting at all and even at the base of it I have no issues with my hair getting caught under it.  I really do wish I was allowed to join both companies as I like them both for different reasons.  I don’t like not following policy though and I’m glad I looked into it before just joining both. I am leaning towards Color Street because I do prefer the strips over the bottled product, but I just wish I could have both. I also like that it’s launching new to Canada next week.

This week I was taking my own writing on self care and putting it into action with a really relaxing bath this week.  I was really cranky and my body was achey after work one day and both my body and mood were improved after I had that amazing bath.

I’m also happy to report that my sleep has been amazing for weeks now.  I’m getting at least 7 hours and it’s pretty solid.  This extra movement along with the routine of back to work has really put me back on track.  Even when my mind starts racing in the evening, taking a few hits off the CBD vape pen has made a huge difference with calming me down and helping me pass out.  I really don’t need very much, just 2 or 3 small pulls and I’m good.  It works really quickly for me too and I wake nice and rested in the morning.

That’s about it for me this week. We’re getting close to midnight as I’m finishing this up and I’m definitely feeling like I could crash – so g’night!