Here we go! 1st international travel since the pandemic hit. I’ve missed these Heroclix trips as they’re always so fun. Ever since I started travelling for Heroclix tournaments, I’ve saved all my vacation time at work for these trips and I’m so glad that they’re back on again!

This is going to be a very long blog so I’m going to break it up into 4 parts. Part 1 is here with Wednesday travel day and arrival in Graceland along with Thursday tournament check-in, attempted SLOP and Graceland tour. Part 2 will be Friday Team Worlds Tournament. Part 3 will be Saturday which is Single Worlds Tournament. Part 4 will be Sunday which is SLOP and Singles top cut with Monday travel home and final thoughts.

I’ll start by saying that this was my first time travelling alone. All of you who have been following me for a while know that going new places and doing things alone for the first time are really high on my anxiety provoking list. But here’s to pushing myself and doing new things in the name of growth and knowing that the payoff for doing it is seeing a TON of friends I haven’t seen in a very long time and doing things I really enjoy when I get there. I purposely built extra time into the trip by going an extra day and leaving the following dayso I could spend time with friends and be social so it wasn’t as rushed and I could enjoy the extra time away. I also tried to focus on getting pictures with friends and was pretty successful of getting tons of selfies (and hugs!) with friends from all over. If you’re friends with me on Facebook, they’re all posted on my page there. 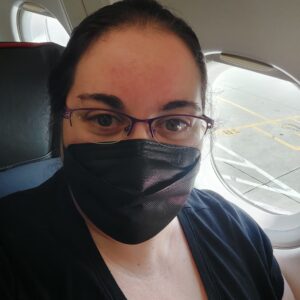 I’m surprised I woke as awake as I did because I had trouble sleeping knowing I was going to be travelling alone but thankfully, I wasn’t too tired and the anxiety kept me alert. My usual route to get to the airport is taking the subway across that takes me to a bus that goes straight to the airport. This is my first time travelling through terminal 3, but it was easy enough to navigate thankfully. Security had zero lineup and I was through in 5 minutes with no issues. Customs was the same. 5 minutes and the only questions were where I was going, what I was doing, when I’m returning and if I had anything to declare. Because I got through so quickly, I now have 2.5 hours until my flight is to depart so I search for breakfast and find a Starbucks and bring the breakfast sandwich and banana to the gate. That’s when I learn my flight is delayed 80 minutes. About 20 minutes later, they announce that it’s delayed another 40 minutes – so 2 hours delay! I’m super grateful I planned for this and had built in a 3h20m layover as there was an option of a 1hr30 minute layover that I could have chosen and I’m so glad I went with the longer one. One of my fears of flying is the whole seatbelt length (if you remember a post I wrote a few years ago about my first time ever having to ask for an extender on just 1 of the legs of a journey because planes are all built so differently). I’m so glad that this first flight I didn’t have my fear materialize for seatbelt issues. It was plenty long, and I even had inches loose to pull it in. This flight was fairly uneventful other than the landing that the pilot decreased at a fast rate and my stomach felt like I was on a rollercoaster. We arrive in Charlotte, and I make my way over to the flight number 2. Thankfully this one left on time and same easy going with the seat belt. I think I’m liking American Airlines airplanes – this was the first time I’ve flown with this airline. I was fortunate that on both flights, even though they were both pretty full, there was no one in the middle seat so there was lots of room to be comfortable.

I get to the airport and find the information booth and call over to the hotel for the shuttle to the hotel – I was glad I remembered that from last time I travelled there. As soon as got off shuttle I see Rob and Jonna walking towards me as they had arrived at the exact same time. We couldn’t have planned that better if we tried! Then as soon as walk into lobby I see Kalder and Simeon. Got checked in easy and made plans to meet Rob and Jonna back in the lobby. When they met me, Rob had a Jeremiah box of stuff for me and a few others for me to hand off for him. I didn’t open the package for me as I wanted to wait for Mike and Tom to arrive so I could open it with them. We dropped the box in my room and off we went for dinner and Julius joined us too. I decided to order the cobb salad and it was fantastic. When we finished, we all went and hung out on the back patio, meeting with locals Jocelyn and Rob, a bunch of dice master people that I can’t remember the names of, Kalder, Simeon and Ian. Jimmy and Scott D joined us for a while when they saw us out there too. I ended the night by getting PBJ (for those that don’t know, the hotel does a PBJ bar every night at 10) and having wine with Rob and Jonna (Jonna brough something fruity she was telling me about months ago that I wanted to try but we don’t have in Canada) while waiting for Azarith to get to the hotel. Once Az arrived at like midnight, I met him with Chip and Bryan in the lobby and then Az and I went up to my room and we had a good chat for a couple hours before crashing.

Chip and I were talking for months before going and made plans for breakfast the first morning before everything gets crazy busy, seeing as we were both there early. So, Az and I met up for breakfast with Chip, Bryan and a few other west coasters who I met for the first time joined us too. We then walked over to get our TCB packages. Having a few hours to kill, we decided to go do the Graceland tour that came in the package right away before getting too busy with all the Heroclix. I’d done it last time but didn’t mind doing it again with them as they hadn’t done it before – and there was a new added museum to check out with it. We ended up having to do it super quickly to make it back in time for signing up for events as we kept getting delayed from our start time. My body decided to betray me as I stepped off the shuttle bus and felt my knee re-injure (AGAIN) itself with a twist, snap and pop. I kept moving though and back to the hotel we went to get our clix stuff to go back over to the convention center for signing up for events.

The doors were opening at 2 with events to start at 3, but the line was so long that there was no way things were starting on time. At least waiting in line was fun – getting to see lots of people and having great conversations and in that time, Mike and Tom also arrived to join us too. The line got even more frustrating because as we finally got in and close to the check-in table, they started pulling out people to either side of the line (for Silver and Battle Royals) that they kept splitting the line off and we were just standing there wondering what the heck was going on around us and where do we go. We had intended to sign up for the Thursday SLOP event but before we got to the front of that line, it had hit capacity. When we finally got to the front of the table, we got signed up for Teams, Singles and the Sunday SLOP. This means I ended up not playing any games at all on the Thursday and was just being super social. I really hope for next time, they set up online pre-purchases for the events (and purchasables too!). That would save a lot of those headaches. As I was wandering around, Simeon got me for an interview on the Dial H live stream to chat about what I was looking forward to for the weekend (it unfortunately got half cut off from connectivity issues). I also had plans to have a chat with Wizkids Emily and play a sealed game with her, but she ended up getting too busy (understandably! It was crazy busy!) so we rescheduled for Sunday when stuff is over.

After we left the convention center, we went to dinner in the hotel and this time I got the chicken sandwich because Julius got it last night and it looked really good. The only thing was that it was grilled not fried, like it was described, but I wasn’t complaining as I enjoyed it very much and almost preferred it that way. Seeing as it was an earlier evening than the rest of the weekend was likely to be, Mike, Tom and I decided to go take a dip in the pool with Jonna joining us. I will say that I was disappointed that the hot tub that was there last time was now gone. While we were down there, we were spontaneously joined by Nate, Patrick, Bryan, Chip, Ryan, Christine and Alex. Chip had me taste his pina colada beer, knowing that I don’t drink beer but wanting me to try something different and maybe not hate beer by trying a new kind. It wasn’t terrible. As the pool closed, we headed down for the PBJ bar again before heading up to the room. 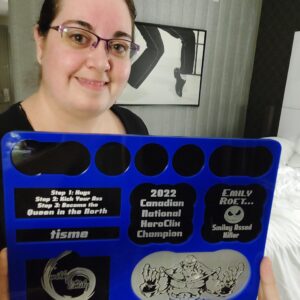 Once back up in the room, I finally opened the package for me from Jeremiah. I was given a heads up that it was coming so I could make sure to leave room in my luggage to bring it home and knew it was a new tray (again, that heads up let me know I didn’t need to pack my current one). You see, I was told that a bunch of friends pitched in to have one made for me to celebrate my Canadian Nats win (we did the same thing for Devin when he won the last one), but I had no idea what they put on it. OMG it was so perfect! My personality is all over it! Nightmare Before Christmas, my blog logo, Thanos from my winning team, HUGS, my championship title and my nicknames. Also included were some new personalized action tokens that match the tray with my logo on one side and JSA, my team, on the other side with the acrylic matching the tray. I have no idea who all went in on it but thank you all! And as always, Jeremiah’s work is impeccable!

That’s it for these 2 days. Stay tuned for part 2 tomorrow – sign up for my emails in the footer of the page to get a link when the next part goes live!