As with every morning, we went down to do the breakfast buffet in the hotel. Yes, it was a little expensive, but I thought it was worth it to be able to have choices that could be healthy and sustaining for the long days with very little time to grab food throughout the day. I really enjoyed all the fresh fruit, yogurt, and eggs – especially when I started getting the omelets instead of the runny scrambled eggs. I did also bring snacks with me for in the day so I could have something easily – but I mostly didn’t have much in the day until dinner so having the protein and fresh stuff in the morning was super helpful. 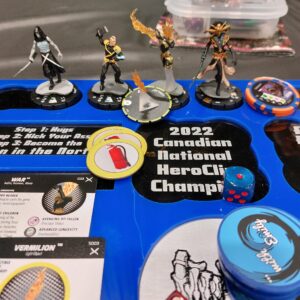 Team Worlds Tournament. This year for Teams, I’m joined with local Canadian women Ajà and Jocelyn to make up our team Calm Your Clix. For the first time ever, instead of building from 6 boosters, they listened to what people have been asking for and gave us all a full brick. This is great for both team building and making it a more level field where there won’t be outlier teams that may end up with multiple chases. Going into it, Ajà was hoping to build an X-Men team that was focused on common Storm. Jocelyn loved Arcade and was hoping to pull him with some robot support. I had no idea what I was hoping for but was super excited that we pulled chase Annihilation with War and rounded it out with 2 more warriors in Solem and Cable. I had the Sword Bearer Trait on War and put Vermillion on him. Both Ajà and Jocelyn were also both able to build the teams they wanted, so we all got to play something we were comfortable with and enjoy. I didn’t take enough notes on my games to remember the specifics, but I’ll try my best to re-create based on the build sheets! 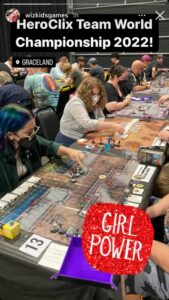 Wizkids caught a picture of us in our first round and put us on their Facebook stories!

Round 1 was against Joe. He played full point Merlyn, Wolverine, Magik x2 and White Priestess. I won map and put us on Negative Zone. I moved up a little, but behind walls so I could be a little protected and closer for the pogs I was making. He moved up a little down a hallway. I was able to get around a corner with a pog and a light object to take out one of the Magiks and shot with Cable to hurt Wolverine to take him off his move and attack. He used Magik to bring up Merlyn and White Priestess into a room that was pretty close to my team. I shot at Merlyn with Cable then charged in with War, using Blades to also ping both Magik and White Priestess with Vermillion. He just didn’t have enough damage to deal with my figs and I was able to slowly pick them off and ended up winning 285-0.

Round 2 was with Cory playing Honey Badger, Dani Moonstar, Wolverine, Magik, and both common and uncommon Cyclops. He won map and put us on Desert Wedding. This was my toughest match of the day. I just couldn’t get close enough to take enough out and he out-ranged me by far. I didn’t have the outwit I needed against his Honey Badger and he made really good use of Dani. He kept mind controlling my pogs to damage my figs and move them far enough away that I couldn’t get to his figs with them the next turn. The attacks that I was able to do, I missed a whole lot of them – it took me so long to actually hit Dani. I did manage to take out a few things though, so I at least scored some points, losing 145-300.

Round 3 was against Paris. He was playing Cable, Abigail Brand, Storm x2, Bishop, Peeper and Jean Grey. This team scares me. He had tons of mobility and protection. I think I won map and put us on Negative Zone (he also had it as a map on his list as well though, so I could be misremembering). We both moved up a little – I did similar to round 1 where I moved up, but behind some walls. He moved up, protected in a room and put up blocking to stop my path. I shot out a wall with Cable and charged in to take out Peeper and sent some pogs his way to block the way to my figs. We very much had a big slug fest with everyone within about 10 square block of each other and made a lot of attacks back and forth and I just managed to have mine connect as his dice went really cold on him. I ended up with the win 300-85.

Round 4 against Oscar. He played a full point Merlyn, Captain Britain, Magik and Green Priestess. He won map and put us on Otherworld Castle. It was a perfect choice for his team, especially against mine. He went up on the rooftop and was able to shoot down at me and I couldn’t get to him. I stayed back a little and was patient enough that he came down to come after me. I managed to one turn his Captain Britain, taking out a big source of his damage. He got my War (my only flight), making it really hard to go after him. I took his Green Priestess and then his Magik. He takes out my Solem and is now up 155-150 and I know I have to take his Merlyn to win. Instead of just running away, Oscar chose to come in and fight. This cost him the game as between the pogs and attacks from Annihilation and Cable, I was able to get through the dial and won 300-155. I asked him after the game why he didn’t just run because I had no way to catch him if he just went from rooftop to rooftop and he said he doesn’t play like that and likes to keep fighting. All in all, our team went 2-2. Jocelyn went 1-3. I went 3-1. Aja went 3-1 (her round 1 was interesting with her opponent playing a figure at top dial when it was supposed to be lower dial and resulted in calling over a judge and her being awarded the full points for the figure and winning the game instead of losing it). If we had both won on the same matches we would have gone 3-1 and I think we would have made the cut because we had a lot of points. In the end, we ended up in 22 out of 57 teams – not bad! The team winners ended up being my friends Azarith, TJ and Tony of team We Don’t Talk About Bruno. Congrats guys!! After it ended, I got into a battle royal using my pass from the TCB package – this ended up being the only battle royal I played the whole weekend. We had some time to kill before the Fan Appreciation event so we went back to the hotel for dinner (got the burger this time and it was fantastic!) and then back to the convention center for Fan appreciation. I’m super excited for the announcement of knockback damage coming back in the next rules update! After the Fan Appreciation, we headed back to the room to prepare for Singles the next day – making sure we had everything, looking over the maps and setting up start zones and opening moves and filling out build sheets. I also went and got ice for my knee that was very stiff and swollen from the day before and was glad I had Advil with me (and super appreciative of Jonna having Aleve with her as that ended up helping more than the Advil did).

That’s a wrap for Friday. Part 3 coming soon – don’t forget to sign up for my emails to get links in your inbox when a new post goes up!