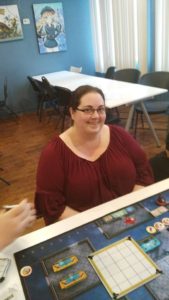 What’s Heroclix? Never heard of it before? It’s a table top game with little plastic super heroes that battle on a map. Each super hero has a dial with stats in it that let you know their values and powers. A lot of people play it casually, but I mostly enjoy playing it competitively. For competitive, you build a 300 point team and whoever can KO the most points in the 45-50 minutes wins.

In my spare time, my biggest hobby is playing this game. I’ve been playing for about 3.5 years now and I’ve loved every minute of it.

I’ve been playing with various versions of the team I’ve been playing for a year now, tweaking it to make it better and changing things out as sets retire and new sets get released. I’ve also been doing TONS of play testing with it.  We have such an amazing community of players and judges, there’s always someone willing to get together for a game.  I think that’s one of my favorite parts, the players.  99% of the time everyone is friendly and helpful.  Makes traveling to play enjoyable (my second favorite part of this game – traveling!), knowing that you’re going to spend the time with kind people who can fight hard in the game but laugh and joke with after.

There are 2 kinds of tournaments. Ones run by Wizkids and ones run by an outside source who have made a tournament circuit called ROC. This event was a Wizkids run one. They hold a series of Opens each season, we call them WKO’s. You can win exclusive figures by placing in the top 8 and you get more figures the closer you make it to winning. If you come first, you also earn a qualification into Nationals.

Canadian Nationals is coming up next weekend (July 14/15 2018) and unfortunately, this WKO that I won gives me a qualification for NEXT years, not this years, so I’m stuck grinding on the 14th to try and get a seat to play in Nationals. At least I don’t have to worry at all the whole year about trying to qualify for next year!  I’ll still go and play them all because I love the game so much, but I sure am feeling more confidant about grinding and making it into day 2 with this team tho! Again, I’m slightly tweaking it because convention exclusives will be legal now.

I faced some really tough opponents to make it to the top. We started with 4 rounds of Swiss and then cut to top 8 for single elimination. In top 8, I ended up facing a team I had played in Swiss. He played our second game much better than the first time we played. It was super close and he’d ALMOST won, but I managed to take his team in the last minutes. In top 4, I faced someone who I used to have trouble beating. Unfortunately for him, it was a really bad match up as my team is a really hard counter to his team. I have ways of doing passive damage easily if I’ve placed well and his team didn’t have enough ways to get around it. In the top 2, I again faced someone who I’d played in the Swiss and he was my only loss in the Swiss. An excellent player who’s won and placed really well quite often, I’m really glad that we did face earlier, because it gave me ideas on what I could try different. It was such a close game. A few missed dice rolls, different positioning and it could have been another game where I’d lost. I ended up winning 150-120 and taking the tournament. He’s challenged me to face again, and because we play test with each other, I know it’ll happen. He says he’s got ideas on what to do different against me for next time, and I’ve got ideas too, now that I know a little better what the figures he’s using do too. I misplayed a little, thinking that one of the powers did more than it did and I wasn’t as stuck as I thought I was. I can’t wait to see how it plays out when we face again! Maybe we’ll have the chance at Canadian Nationals!