It’s sure been a hot one this week! It’s been extreme heat warnings all week with no letting go. I’m feeling super grateful that I have central air conditioning both at work and home and have the ability to mostly stay inside. I’m feeling really proud of myself that I haven’t let it get in the way of my daily movement goals and I’ve still been really consistent with moving my body every day. I’ve just gone about it a little differently and instead of walking after work in the heat, I’ve been doing a walking workout at home instead. I went back to the videos of Leslie Sansone and her walk at home work out videos. I think I’ve talked about them here before, but it’s been a long time since I’ve done them. My movement goals did get push off track the end of the week though. The muscles in my calves (starting with the right and then after a few days becoming both) have gotten really tight and sore. It’s a stabbing pain when I take steps. More about that later when I talk about my doctors appointment though.

Tuesday I recorded on another podcast about my Canadian Nationals win. This time it was with my friends at the JSA clix podcast. It was nice getting to chat with Jay, Devin and Az and was fun getting to replay the top 4 match in words with Devin, who has a much better game play memory than I do. I’m not sure when it will go up, but if you subscribe to their podcast on podbean, you’ll get the notification when its live.

Can I do a real talk on the side biz? This is really just a brain-dump so I can remember how I’m feeling in this moment. I’m not feeling as passionate at doing it as I was just a few weeks ago. Don’t get me wrong, I LOVE the product and everything about it, I just haven’t had the motivation to keep up with the daily posting and find I’m not feeling quite as interested in doing that. My goal has always been to get a discount for myself and use my commissions from sales to fund my own purchases – and if it brings in extra for fun stuff, then great! But of course with less posting comes less sales and I just don’t know if I want to continue pushing it as hard as I once did. One of the big things that kinda propelled me to wanting to do well and succeed was the whole aspect of being part of a team, reaching big goals together and lifting each other up. It was my favorite thing when I was with the old company and was what kept me so engaged to it for so long. I just don’t feel quite the same thing now. Don’t get me wrong, I love who I signed up under, but I don’t feel a connection to the bigger group. I almost just feel like a number and that doesn’t feel motivating. I’m not making any rash decisions or anything like that – it could just be the season I’m in and need a little step back and I’m glad that it’s mine to do with as I want and I don’t need to make any immediate choices with what I want to do. I think I may put up a big in-stock sale still to thin out the inventory that I’d stocked up on for the vendor event I did. This week has been very uncharacteristic of me though as I haven’t posted in my group at all. No daily self care post (even though I still am focusing on self care, just not being public about it) and no nail posts.

Friday I had a doctor appointment. It was the re-scheduled one that got cancelled when Rogers went out 2 weeks ago. It ended up with the outcome that I thought it was going to be. I’m now on blood pressure meds. She said that they could make me sleepy, dizzy, nauseous and have some swelling – thankfully I haven’t felt much of it, other than a bit more tired. I went into the appointment knowing that it was going to be the likely scenario, but I’m still not happy about it. I am however grateful for the knowledge of it though so I can do better and yes, take the meds to help it. I asked if this is a med I’ll need to be on for life or if it’s possible to come off of it. She said that it likely is for life as most who start it don’t come off it – but, it’s not 100% and there is a chance to come off of it with lifestyle changes and some weight loss. So I’m feeling very determined to do better. Keeping up with the increased walking, decreased sodium and more produce to keep full to help with losing some weight. In the last 4-6 weeks since I last saw her and I was already making those changes, I’m down just over 10lbs from what I was already doing, so I’m going to continue with it, once I can walk without pain again. Speaking of, when I saw her, it was only my left calf hurting – so I thought to mention it to her because of the now heart issues, I wanted to make sure that she didn’t think it was something like a clot. Thankfully, she thinks it’s just a pulled or strained muscle – likely from the extra walking that I increased. So now I need to RICE them until they’re better – and yes, it’s now both of them. On the weekend, the other one also started hurting. Hopefully after a few days it’ll be all healed and I can get back at it. 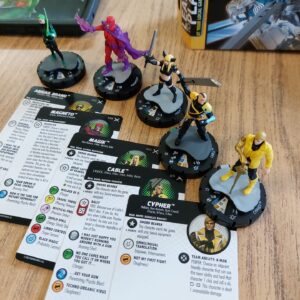 Saturday I went to a Heroclix prerelease. Only 1 store in the area got their product in for it, so off to Pickering we went. I’m pretty happy with the 2 boosters I got. I pulled a super rare that will likely be good in competitive play, a sword equipment and a tarot card. I was happy with the team I built and had a lot of fun playing with the new figures. I ended up only going 1-2, but the 1st game really could have gone either way. Matt had some pretty lousy dice rolls and rolled a whole lot of 4’s. He played really well, tying up my team and making me focus on 25 point Mystique. I was close to one shot-ing his Cable to win the game but my dice rolled a 3 for the miss. My 2nd game against Kevin, I threw him off guard by being able to sink 5 damage into a figure he moved up that he thought I couldn’t get to as he forgot the SHIELD range bump. He thought the game was over and almost conceded but played it out. I did end up winning the game, but it was a lot closer than he thought it was going to be. My last game was with Mike and he had a great team that was really hard to take out. I just didn’t have enough to get through his Honey Badger. All in all, a really fun day and it’s always nice getting figures early at prereleases! 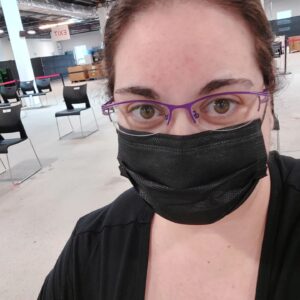 Sunday I went out a few hours with my dad and brother. We started with going to a vaccine clinic to get our 4th shot/2nd booster. There was zero line up, zero wait time and we had the choice of either pfizer or moderna. We both went with pfizer. As a reminder, I had pfizer for the 1st and 2nd shots and moderna for the 3rd. I had flu like symptoms and extreme exhaustion with the pfizer shots and got pretty bad covid arm with moderna. So far, I only have mild pain and swelling in my arm with this shot and some tiredness – no flu like symptoms at all and it’s now been over 24 hours. I’m glad that I went to get it though, especially with travel coming up. This way I’ll know that my coverage will be as effective as possible while away. After the shot, we went out together for lunch and then grocery shopping. When we got home, I pretty much just wanted to rest my legs with some ice on them. A friend reached out for a practice game to get ready for US nats so I got to be a little social playing a game and chatting a bit after. And yes, I did end up falling asleep fairly early after being tired from all the things causing me tiredness.

All in all, a pretty good week.