I had fully intended to get last weeks post out but I ended up doing a thing and it took all my energy writing it instead – so in the whole theme of my writing, I practiced self care and let my usual weekly post slide last week and am just combining it with this week. In pandemic stuff, the talk is all about variant B.5 lately and talking about being in the 7th wave with numbers going up some again. I’m not hearing anything on putting restrictions back in place, other than going back to doing testing again on travel back into Canada. As always, I’m still masking as that is my personal comfort level. They also announced opening up spots for 4th shots for those who want to get a 2nd booster.

Last week was a therapy week. I had quite a bit of big things to talk about with her in my hour, but I feel like with most those big things that happened, I handled them pretty well. I love that the tools that I have in my kit are really helping and it shows how hard I’ve been working on keeping the anxiety as low as possible by actually remembering to use the tools that I know help. I felt the feels, talked them out with friends and family, made plans and followed through. It’s funny, when I was talking about the things that happened this month with her, she was like “woah, you went through a whole lot and handled it all really well”. I can remember when things like this would happen and I wasn’t in as good of a mental state, that it would totally overwhelm me and be difficult to function. What I also really love is that these last few weeks I feel like I’ve also not experienced too many feelings of being low as well. My motivation has been pretty good and with the consistency of all that I’ve been doing for moving my body and eating healthier fresh foods has definitely contributed to that. Ya’ll, it’s taken me a whole lot of hard work on myself to get to where I am now. I still have lots of struggles, but I’m finding that they’re not as hard to pull out of. Talk about growing and pulling the positives out wherever I can find them.

Last week I was also supposed to have that doctor appointment to see if my increased walking and reducing sodium is helping the blood pressure at all. I’ve also been monitoring at home to see if I can get better readings than when feeling stressed at the doctor’s office. I am unfortunately not seeing much better numbers at home than I do when at her office. However, we had a thing happen with one of our biggest internet service providers last week and no one with Rogers had any service whatsoever for almost a full day. So when I showed up at the appointment, there was a sign on the door saying that they were closed due to the outage. So my appointment has been rescheduled for next week now. I suspect that she’s going to want to put me on meds, which I’m not looking forward to. This does give me another 2 weeks to continue what I’ve been doing to see if hopefully more time will impact it more. I am absolutely going to talk with her and see what I can do to not be on meds for life. I’m determined and hopeful that I won’t need to be.

This has been a quite exciting 2 weeks for Heroclix! Last week I was doing a whole ton of Canadian Nationals practice leading up to the actual event. I got a bunch of online play in with Sam, David, Mike, Tom and Jay, as well as some great brainstorming conversations with Adam, Jay and Dan. I truly believe that I would not have done as well as I did if it wasn’t for all the time I spent with people who are amazing at this game. I learned a whole lot from them and was able to put it all into practice when it counted! Saturday morning Tom and Mike came to pick me up and we made really good time travelling to Ottawa. As always we had great conversations and jammed along to Tom’s tunes. They were still on round 2 of the first sealed qualifier when we got there so we had lots of time to fill out our build sheets and hang out with Joe and Jay who were judging. I’m super excited for my friend Jocelyn who qualified in that first qualifier – but she was unprepared to actually play in the event Sunday. So I let her know what I had available with me for borrowing and I’m glad I could help her pull together a team to play. I didn’t go too into the qualifier in my tournament report, but I ended up going 1-2 in it – thank goodness I was already qualified and had a seat for Sunday already secured! My goal was to see the field and what it was doing and let me tell you – I’m SO glad for the opportunity to do that. I really need to see stuff on the map to fully grasp what it can do to me and I needed those losses to learn what I should be doing different. It really helped cement in my head that I needed to be more protective and really wait for the optimal times to strike. So Sunday, that’s exactly what I did. I ended up going undefeated and winning Canadian National’s as the first woman to ever win a Heroclix National title! Super exciting. You can find my full tournament write up here if you haven’t read it yet. This week, I had the pleasure to be asked on to a few podcasts. I recorded on Tuesday with Clixed Off and on Thursday with Bradcast. Both those episodes were released on Friday. I was also asked by Coffee and Clix to join him on his podcast as well, I just haven’t scheduled that date with him yet. Now I get to be excited for the World championship in September (and got the flight ticket booked this weekend too!) – I just need to figure out what I want to play for it. There’s still 2 months to decide, so for now I’m just enjoying the excitement of the moment! I did go out on Sunday to play in a casual event and it was really fun playing some of my pieces that I hadn’t yet used. I met up with friends before the event for Pokemon Go community day as well and we walked around Square One mall to catch a whole bunch of stuff.

This week is my kiddo’s birthday! He’s officially 25 years old – a quarter century! I seriously don’t feel old enough to have a kid who’s 25. I’m so glad that this year he’s finally starting to find some direction in life and seems motivated to do something. He’s back in school for a program learning to be a machinist. Not what I expected him to lean into, but he seems to be enjoying it and doing well at it. Fingers crossed he finds work after and it’s what he wants to do. We’re not doing anything super special, just going to have a quiet weekend with family coming over for a bit and going out to dinner. He’s spent his actual birthday day with friends. 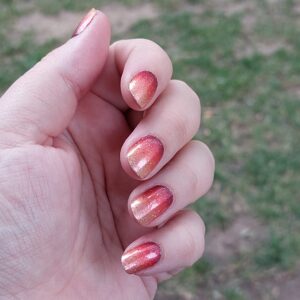 It’s been a bit of a quiet week with the side biz. I’ve been so focused on practicing for nationals that some of the other stuff around me got a little quieter. That’s one of the things that I love about it though! I can fit it into my life how it works for me. I know that I don’t sell as much when I don’t stay consistent with posting, but sometimes that’s okay. I did change up my mani though – it’s a super pretty ombré of oranges like a sunset. Back at it this week and I think I’m going to soon do a stock sale – so if you want a sneak peek at what I have available, let me know and I’ll let you see if there’s anything you want before it goes up!

Friday at work I decided to be spontaneous and asked Jay if he wanted to go see a movie and he said yes. We started with going out to dinner, hanging out in a park for a while and then off to see Thor Love and Thunder. It was good. Not my favorite movie, but enjoyable and I’d watch it again.

That’s about it for me these last few weeks – it’s been an exciting couple of weeks!