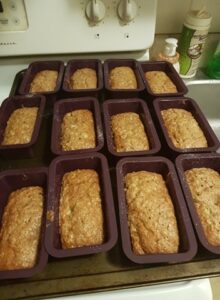 Back to baking! I haven’t thrown together ingredients to bake in a while and I was craving a dessert, so banana bread it was again. We got some bananas from an instacart order and they came a kinda weird colour, something that we didn’t want to just eat – so into a brown paper bag to speed up the ripening process and it was enough to turn into a double recipe. I only have 1 loaf pan, so I decided to instead put them into mini loaf pans because I have enough of those for probably close to a double or even triple batch. They came out amazing and were perfect for just grabbing – and my son was happy for the bit of extra surface area for the sugar sprinkle I put on top.

Got some more practice games in with Mike and also played my 3 pod games for the Gongaii 2×2 Heroclix tournament – and we made the cut.  We came 15th, so that means we play 1 more round with the players who came 13-20 to see who will make it to the top 16. As always, tournament report coming once I’ve finished writing it all up. I love that you guys enjoy reading my tournament reports – they’re some of my most read blog posts.

Looks like I’ll be heading back to work.  Even though the cases are still high, the province has decided that it’s time to re-open things again under their new measuring scale. It was initially supposed to be 28 days closed but Toronto asked for an extra week before re-opening. So the other location is opening as scheduled after the 28 days and our location will be after 35 days.  The first day back is a Saturday, so I’ll be back in on the Monday and have some numbers ready to input.

This means I need to get my sleep schedule back to being good.  Since I’ve been off, my sleep routine has been terrible again. The anxiety and mental static are back and my head is so loud with the noise that I find it difficult to fall asleep.  Thankfully, it’s not as bad as it was a few months ago before I started therapy, but it’s creeping back up there. I’m still taking my supplements and putting my meditation on, but it’s just too much anxiousness and I’m back to 5am falling asleep.  I’m going to need to set my alarm again and gradually make myself get up earlier and earlier each day and force myself to not nap and get my bed time back to a reasonable time.  I’m glad I’ve got a week to do it over time, an hour a day.  I tried super hard last night without success.  I was feeling tired at 4:30am and tried to sleep but it took me over 2 hours and then I woke 5 hours later, still super tired and brain fogged and ended up passing out for a nap a few hours later.  I hope that doesn’t screw me up too bad for trying again tonight.  The meditation wasn’t helping but I needed something on to distract from the mental static so I put on a bedtime story and I was asleep before it ended.

That’s about it around here.