Here we go again! For me, it feels like we’re back to week 1 again as Toronto gets rolled back to a modified stage 2 and my work is included in the current shut down list. They’ve said 28 days, but I have a feeling it’s going to be longer and get extended. So that means I’m back to being temporarily unemployed again. Again, I got an extra week of work beyond most of the rest of the staff to finish up month end paperwork for October and put in final pay hours for the staff.

Since I’ve been off, I’ve been able to apply for EI again and as soon as my ROE went in I got approved.  This time I’m eligible for 45 weeks of coverage as they put the hours worked from my 2 ROE’s together because none of those hours were used in the first lockdown when they put me right on CERB.

Doing a little with the side biz stuff when I have the motivation and energy to do it. I just had a gorgeous blue mani on and I’m getting ready to change it up for some Halloween pumpkins to finish out October. I got perked with a surprise package just for commenting on a post and it has both a lipstick and essential oil in it.  I’m not a huge make up person, so it was nice to get one as a perk to test out so I can share what I think of a product I’d normally not ever try and the essential oil smells wonderfully citrusy and it’s like they knew that I needed something for calm when they sent me To Be At Peace blend. 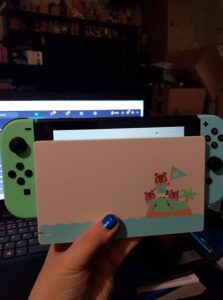 To help fill in some of the time and have a nice distraction, I decided to splurge and buy myself a Switch.  I got the Animal Crossing limited edition one and it’s super cute. I bought the Animal Crossing game too and then signed up for the Nintendo online account which gave me access to play Mario games and Tetris 99 for no extra cost.  Basically all I wanted to play anyways.  Now I don’t have to keep asking my son to use his and as an added bonus, he’s coming out of his room now to come and hang out with me and watch me when I’m playing it while he plays on his. Do you play Animal Crossing?  Feel free to send me a message for my friend code so we can share if we have good turnip prices and such!

I had a therapy appointment which I really needed.  I’ve been feeling that anxiety and depression creeping back to higher levels again.  Not as high as the first shutdown, but I have been feeling it more.  We also discussed a thing that I’ve been having trouble with lately too – self doubt.  I seem to be having a whole lot of anxiety surrounding that.  Feeling like I’m not good enough or doing things wrong or thinking I’m forgetting things, but I can’t think of what I am forgetting and feeling worried that I’m going to make someone elses life more difficult down the road with something I’ve forgotten.  Even with all my lists and they’re all ticked off as done, I still have that niggling feeling that I’m missing something. Working on those positive affirmations to help build that confidence.

I also had a dentist appointment.  I was kind of nervous of going to somewhere that I knew I’d be taking my mask off for but I decided to not cancel and go.  I felt super comfortable with all their precautions.  They had a pre appointment questionnaire to fill out, then on the day of I had to call and wait for them to let me know it was ok to enter. Once they let you in, you have to be wearing a mask, they make you use sanitizer and take your temperature.  The waiting area was spaced out with the chairs and they only let 1 other person in while I waited to be called back.  The individual rooms now have doors on them, that the hygienist opens for you and I noticed an air purifier in the room as well.  The hygienist wore both a mask and face shield while she worked and when I went out to pay for the appointment, the receptionists are completely behind plexiglass with only an opening for the credit card/debit machine. I felt very safe and glad that I kept up with my cleaning appointment.

I’ve gotten a bunch of Heroclix playtesting in with Mike the last 2 weekends. We’re preparing to sign up for the Gongaii 2×2 highlander event that the Eagles are putting on. Mike is being awesome and working around my current team that I keep playing that’s already highlander to build his team.  Just working on the finishing touches and tweaks like picking maps and sideline before submitting builds.

I think that’s about it for these last few weeks around here.