I just realized that I’ve been off work for about 6 months now. So crazy! Since I was in my early 20’s, I’ve always worked full time and almost never took off any days unless it was a pre-planned vacation. In the last 3 years I’ve had more time off than I’ve ever had before. First my work closed for 6 months to do renovations. Then after only being back at work for 6 months the pandemic started and I was off almost 5 months, we reopened for about 3 months and got shut back down with the lockdowns until now.  It’s so weird to have so much time off these last few years when I’ve always been so used to working so hard. Just sucks to not be able to be enjoying this time with friends and family. I miss everyone so much!

I started this week with a walk to the post office.  I had a bulk order that arrived and I needed to get the orders out to my customers. I realized that it was the first time I’ve been out of the house (with the exception of the backyard) in the last month. I really should get back to taking walks again because it felt so nice being out there.

Even though I’m not out there taking walks, I’m still moving my body most days, just in the house instead. Enjoying those HIIT workouts and yoga stretching.  I did miss a good chunk of days doing even that though because I had terrible period pain (I know, TMI, but we’re all friends here).  For those who don’t know, I have something called PCOS and it makes my cycle really irregular and when it arrives, it’s terrible. So I was gentle and easy on myself and now I’m ready to pick back up and get going again. 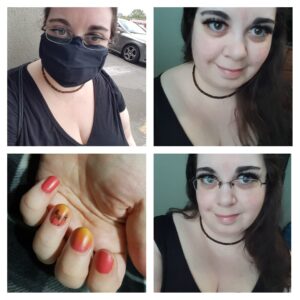 I’ve spent a lot of my time this week doing spa type stuff and pampering. I played with Sweet Pea lashes for the first time and did my nails.  I needed something bright and summery when this cold streak hit.  It was so gorgeous outside and then 180° different overnight it was freezing for a few days. It went from needing the a/c on to piling on the blankets again. Perfect time for bubble baths too! I also did a little decluttering. I threw out some stuff that was not suitable for donating and some expired stuff from the cabinet. Some stuff did get given away as well, which always feels amazing.

I ended the week waking up in pain. I slept wrong and woke with a kink in my neck and it’s painful to move at all. Hot shower to help move some and ice to ease the inflammation, along with some ibuprofen. Meant for a day of supporting myself with pillows and pretty much continuing to binge Breaking Bad on Netflix from last week. Its been a while since I’ve woken in pain from sleeping wrong but I know it’ll feel better in a few days, once it has a chance to relax again.

This week also had another therapy appointment. She was really happy to hear that my sleep has been great for the last 2 weeks.  That’s right!  The good sleep I had last week has continued to this week too. I’m so glad to be getting solid and restful sleep again. Knock on wood that it keeps going. My anxiety and depression have both been at manageable levels the last 2 weeks too. I did tell her of course about the 2 weeks prior when my anxiety and sleep were both terrible. It was really hard for me to think back and figure out the why of it though. My memory is absolutely terrible – one of the reasons I write these little pandemic updates, so I can remember what I did and how I felt. I genuinely didn’t remember how bad my mental health was 2 weeks ago until I went back and read that weeks update as I prepared for my appointment. So thankfully I have these blog posts/journals to look back on to jog my memory and be able to maybe piece together some of the why’s and find patterns or reasons.

While I’m not feeling in a really bad place mentally right now, I know I’m also not at my best.  Especially the last few days. I’m spending most of the day in my room and not wanting to be social with the family. I’ve just been really feeling the need to soak up the alone time and little things, especially noise, just seem to grate on me the last few days. I’ve added in some extra meditation time to help with some grounding and calming.

I really did do a whole lot of self care stuff this week, which made me think about that other blog series I want to add. I know I’ve mentioned it before, but I want to do a self care post each week. I plan to add a page – similar to the Tutorials one – where I put all the self care posts, so they’re all together and easy to find. I’m just trying to think of what to title them. My first thought is to have it be “Self Care Post of the Week – xxx”.  It feels a little long to me and not very creative – let me know your thoughts! Like it? Have a better idea? My ears are open to suggestions!

That’s about it around here this week!