After a few months of the positive case counts staying fairly low, this last week or so has seen the numbers slowly climbing again. Hopefully this is just a small blip and doesn’t grow to be out of control again.

On Tuesday I was really looking forward to the Color Street sPark of Brilliance conference but unfortunately it was postponed. I was really looking forward to getting to network with other stylists who are local to me and getting to see people from head office and the founder speak for the first time. We didn’t find out until the afternoon of the day it was supposed to happen. Turns out the plane had mechanical problems and they couldn’t find alternate arrangements so they need to reschedule it. I’m definitely feeling fortunate that I’m local to where it was being held so I’m not out any airfare or hotel and I got the email before leaving work so I wasn’t even out time travelling downtown.  I can’t wait to hear when it will be rescheduled for!

More decluttering this week, this time it was boxes. I’m terrible for getting packages in and letting them pile up without opening them. I finally opened and put away a bunch of them and got rid of the boxes in the recycle. I was prompted to do it because it was recycle day and I had a bunch of room left in it – so it was the perfect time to get rid of all those boxes. It felt like I did extra chores this week too. Cleaned the bathroom and finally opened and put down the new bath mats that I’ve had sitting in my closest unopened too for a few months. I also felt compelled to scrub down the tile of the backsplash in the kitchen when I was wiping down the stove. Feels great to be knocking stuff off the to-do list. 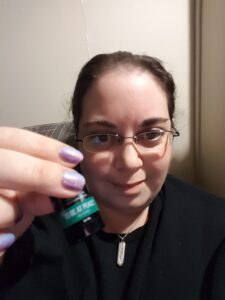 In the process of opening those boxes, I opened an aromatherapy necklace and decided to put a drop of To Be At Peace essential oil in it and wore it for a day.  It was really nice to have that scent reminder to help take a breath and to slow down to help with my anxiety. I hate how long it’s been so high and would really like some release from it. I keep trying to distract myself and it helps for the moment, but as soon as the distraction is gone, it’s back in full force.

Saturday we had both Keith and Mike over. I got to play 4 practice games of Heroclix with Mike. We each won 2 games and we both learned a bunch about our teams. So far I like the team I’m playing but I need to see how it does against other stuff too. Keith and my bro hung out for a few hours. They were going to try out the Oculus but it just turned into great conversations. I chilled with them after Mike left and we enjoyed some pizza before he went home too.

I hope I’m not jinxing it but I’m loving that it’s still sweater weather for my walks. I haven’t yet needed to wear a jacket and have just been wearing my heavy sweater. I did start putting a pair of gloves in my bag though because my hands are the only thing that’s been feeling the chill on days where it is a little cooler.

I got a letter in the mail for an early mortgage renewal. It’s due to renew in March, but they’re offering me a special early renewal rate and I think I’m going to take it. I have until the end of the month to decide, but it’s 1.1% less than my current rate. The only thing holding me back from just accepting is deciding if I want to take a little off my line of credit for some renos and then roll the line of credit into the renewal. I need to get some quotes for the work I want done to decide how much to put aside for it. I have no knowledge on the costs of the repairs I want done so I definitely need some quotes to help with that decision.

I finally got some tutorials for Color Street filmed! I’ve been wanting to do them since I joined in August but I kept not feeling up to doing them. I had done one, but had filmed it with the camera in the wrong direction and it didn’t upload correctly. This weekend I actually did 4 (Prep, Removal, Application and Overlays)! I’ve even edited one (Removal) and got it uploaded to YouTube already too. I’ll get the written form of it with the video imbedded up here in a few days and added to the Tutorials page.

That’s it for me this week.