Wave 4 is still here and starting to build more.  The case counts are going up and we’re currently seeing numbers that we haven’t seen in 6 months. There’s also a new variant of concern that has been a big part of the news this week out of Africa and they’ve restricted travel from there too – but there have been 2 cases found here already.

This week I’ve been having an overwhelming emotional feeling and having a heavy heart. I’m really feeling strong about the people around me who are struggling. Most of the conversations when I’m reaching out to friends and family is that they’re not sleeping well, not feeling well both physically and mentally and there’s been some deaths in their family. I wish I could make it better for them or help in some way.

This week I was asked if I was willing to help out at work and come in on Saturdays. We’re a little short staffed and I just couldn’t leave them stuck so I said yes. I did stress that I didn’t want to do it permanently (I really don’t want a 6 day work week), but I am happy to get the hours back that were reduced from my day. I suspect that I’ll be doing this for a few months, so I’m preparing myself for that. Unfortunately this means not being able to participate in a few Heroclix events that I wanted to do in the coming weeks because they’re all on Saturdays.

Speaking of Heroclix, I’m hoping that Sunday events are able to start back up soon. There’s a group of us who are available – just hoping the shop is ready to have us back soon. I did play some online clix on roll20 with Mike, getting a practice game in. The practice is just for him now though now that I can’t participate in online worlds anymore with the qualification happening on a Saturday.

I’m finally feeling well enough with my stomach that I started yoga again! I restarted the program back from the beginning to get myself in the groove again. I feel so good for having started back up. I’m also still walking every day after work. We got a bunch of snow today so I’m hoping that sidewalks are shoveled and salted by the time I leave work tomorrow so I can continue with it. I’m okay with the cold and snow, I just don’t want to have hidden ice to deal with.

My Saturday was crazy this weekend. Not only did I go to work, I also had my ultrasound follow up and an appointment at the bank. It was a REALLY long day! I won’t find out the results of the ultrasound until the 8th, but my fingers are crossed that all the infection in my fallopian tube is gone so I don’t need surgery. I’d love some positive thoughts out to the universe for that! I was almost late for my ultrasound appointment though because my bank appointment went way longer than I thought it would. I was there just over 2 hours. My mortgage is due for renewal soon and they sent me a letter for a early renewal rate. I wanted to go in person to discuss it though because I wanted more info on options for taking out some equity to do some repairs that I really need to have done. My list is long and once I get quotes I’ll prioritize by necessity and budget. While I was there, we also talked about savings and retirement and I ended up moving my savings and retirement accounts from a different bank to the same bank as my mortgage. They were both previously in savings accounts and making almost nothing on them. Because I don’t plan to use any of it until retirement, we’ve put it into some mutual funds so it’ll actually grow more than it was. I can’t wait to see what a difference it makes. 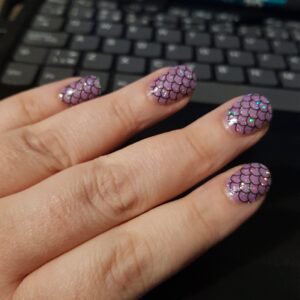 I got another tutorial edited and uploaded to YouTube so it’ll be up here in a few days too with the write up.  I’m absolutely loving the mani I did a week ago and I still have it on now. I played with an overlay over the glitter this time for my mani and WOW! Not only does it look amazing (in my opinion of course) but it also has zero chips. The overlay really made it SO much stronger. I can’t wait to play with more overlays or even just use Clear As Day over if I don’t want a pattern but want the extra strength.

That’s me this week!