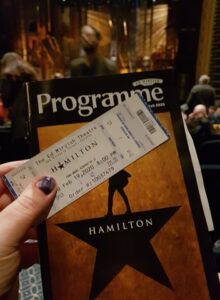 I’m feeling totally brave and amazed at the level of confidence I’ve gained in recent years. I definitely would never have done this a few years ago so I’m really proud of how much I’ve grown. Its all part of self discovery and living my best life. So what’d I do? I took myself on a date. That’s right. Alone. I’ve been really focusing on doing things that make me happy and not feel like I’m missing out just because I don’t have a partner. I never would have been brave enough to go to dinner, drinks and a show by myself before. I’d need a partner, date, friend, son or family with me to go and do things that I wanted to experience. Now don’t get me wrong, it’s fantastic having the company of loved ones with me for experiences… I’m just saying that I don’t need that now, where I would have before. I’ve discovered that there’s some pleasure in solitude too. Getting to do exactly what you want to do, in the time frame you feel like doing it. Not having to compromise on where or what so both/all people are happy with the options.

All this to say – if you’re single, don’t let being single get in your way of doing things. Sure, it takes a mind shift to allow yourself to get used to the idea of going out alone. But trust me, no ones going to stare or laugh at you. Being single can definitely feel lonely sometimes, but that doesn’t mean you need to miss out on doing things that you want to do just because you’re alone. So go see that movie. Treat yourself out to a dinner with appetizers and dessert. Go to that musical. Have a spa day. Take a walk in the park. Go see a ball game. Travel. Whatever it is that you want to do that you’ve been holding off because you don’t have someone to share it with, just go do it! 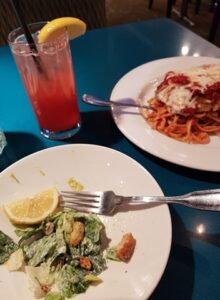 So what did I do this time? I was out and alone for 7 hours. I took the subway from work to downtown and went out to dinner myself. Not just a fast food joint either, a sit down place. The waiter was alone and said that he was a little behind and was apologizing for slower than normal service – which I was totally fine with because my next stop wasn’t for another 2 hours still so I was planning to spend close to 90 minutes there anyways and now I knew I wasn’t going to feel pressured to leave quickly, so even better! I ordered a drink, but they were out of the stuff to make it? So I just told him to surprise me with something sweet, lol. He came back with a Moscow Mule, my first time trying one of those. It was alright, drinkable but won’t be a new favorite. I ordered my dinner of chicken parmesan and took my time enjoying it, never feeling rushed. Knowing the waiter was slow tonight, I asked him for the bill to pay when he cleared my plate so I wouldn’t have to flag him down when I was ready to leave after finishing my drink. Paid and sat there another 20 minutes finishing my drink. Then I walked over to the theater to grab my ticket at the will call window for Hamilton. OMG was it ever amazing! Totally worth the splurge and I have zero regrets for having gone.

Have you been brave and gone somewhere by yourself on what would be typically considered a group/couples thing? I’d love to hear about your experience.