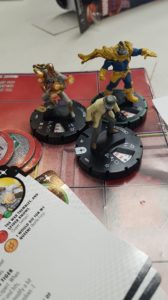 I managed to make it out to 3 WKO’s this season! Lucky me, because these are the WKO’s where you can get the highly sought after objects: Exospecs and Proxima Spear. Exospecs are supposed to be participation prize, but the kits only come with so many in it, so there is a chance not everyone will get one if the venue has a high turnout.

The first one I went to was in Las Vegas at Maximum Comics 2.0 while I was on vacation. This event had 20 players show and that meant enough Exospecs for everyone, except the judge. I gave him mine in exchange for entry into side events because I knew I’d be going to 2 more events and would get another for myself and he wasn’t going to any others. I know he appreciated that.

This event was sealed. I ended up making a team with Destroyer Thor, Prime Captain Marvel, Klara Prast and Tony Stark, Inventor. Round 1, I faced Carlos who was playing spider island Hulk, Iron Goblin and Sheriff Steve Rogers. This was my first time facing a spider island Hulk and I didn’t realize what that middle of his dial looked like. I just couldn’t get through him. Carlos won this one 295-0, and spoiler, he ended up winning the whole event. Congrats Carlos! Round 2, I faced Gary. He had Gertrude and Old lace, Ultimate Thor, Worldbreaker and Crossbones. I knew I needed to get Ultimate Thor off his outwit, so I knocked him down some. Then I went to work on Worldbreaker and was then able to take out the team. I managed the win on this one, 295-170. Round 3, I faced Christopher. He was playing Sheriff Steve Rogers, Thanos Duplicate, Black Widow, Karolina Dean, Bullseye and Nico Minoru. This Bullseye was a little scary as he went right after my Destroyer Thor, but I pulled out the win again 295-165. Round 4. I need to win this one to make the top cut. My opponent was Pasky and he played Spider Queen, Sheriff Steve Rogers, Thorus and Gunslinger. This game was SO close, going right to time. I took out all the little guys and only had Spider Queen left to deal with. I had hit her to her stop click and managed to hit her again so she was down off of it. I tried for a flurry with Destroyer Thor and missed both attacks. Either hit would have won me the game. We knew that time was going to be called soon. Pasky looked at me and said he was so sorry and he normally doesn’t play like this, but he needed to do it… and he ran. Staying just out of my reach until time was called. It was totally the right move for the game and his only chance to survive as he was up on points. I just couldn’t reach him to tie him down and time was called. Pasky took the win 170-100. This means I don’t make the top cut.

It’s always nerve wracking for me to go to a new place alone. So often my anxiety gets the best of me and I miss out on new experiences. I’m SO glad I went out of my comfort zone and did it. Everyone was friendly and welcoming. They even invited me along to lunch with them when we had the break between Swiss rounds and top cut. I stuck around and played side events until the store closed. I won 2 Proxima Spears to take home with me and was able to trade my Destroyer Thor (now my 3rd one pulled!) for a Witch Queen Le Fay that I didn’t yet have.

The second one I went to was at my home location, 401 Games in Toronto. This event was constructed, so I played the team I’ve been playing all year, my Sam Cap/Shredder/Dust team. We only had 12 players at this event. Round 1 I faced Cecil. He was playing a x-men team. He looked at me and knowing my team, challenged me to beat him on turn 2. I think it took 4 turns, but I did win 300-158. Round 2 I played Jason C. He’s built a Sam Cap team with his own twist of adding Kirk with venom pump to it. It was really good for him and he got off a great alpha strike. The best part of the game was when he trouble alerted in Aquaman and made a ton of average fish and the fish hit! He won 370-73. Round 3 I faced Jason O. He was playing his blackbird xmen team. Jason and I usually have close games with these teams when we face and this one was no different. At the end of my last turn, I had Dust’s smoke under his Wolverine on last click and put a walking wood for plasticity next to him. In the middle of Jason’s turn, time was called and Dust’s smoke didn’t have a chance to finish off Wolverine at the end of his turn. I would have won by 5 points, instead, Jason won 158-113. Because there were only 12 people playing, I actually made the top 8 cut with a 1-2 record. I faced Devin in top 8, and spoiler alert, Devin won the tourney, so I lost this one. He was playing his Witch Queen Le Fay team that he’s been toying with and it worked out really well for him. He won 395-65.

The last event I went to was in Rochester at Millennium Games. We decided to go there instead of another one in Ontario because both Jay and I are already qualified for Canadian Nationals. We traveled the night before and spent the night with Patricia and Nick. This was a sealed event and 15 players. Both Jay and I pulled Thanos Prime. I played mine with Iron Fist and Crossbones – the enhancement on Crossbones sure came in handy for making Thanos able to once shot pieces. My first opponent was Nicholas Pike. He was playing Chase Stein, 2 Klara Prasts, Alex Wilder, Sheriff Steve and Maestro. First turn after moving up I went right for the Maestro because that was the big threat. I managed to one shot him and then just picked off the other pieces, which took a while with all the the stealth and shape change! I won 290-0. Round 2 was against John. He was playing Captain America, Spiderman, Spinneret, Tony Stark and Thor. I won this one 300-0, but sadly I don’t remember the details. Round 3 was against Carl. He’d pulled great and was playing Big Boss Hill, Nick The Fury and Gunslinger. He won map, picked the office. I inched up and he inched up. I ended up going in with Iron Fist to try and tie them up with the plasticity but he was able to kill him quick that turn. From there I just wasn’t able to land any hits with the Baron/Baroness trait’s on the defenses, making them so high to hit. Carl won this one, 290-0. Round 4 was Daniel who was playing Iron Goblin, Crystar and Captain America. Again, the details of this one are fuzzy to me, but I won, 300-0. This puts me in top 8 with a re-match against Carl. This time I win map and I pick Wakanda for the openess and all the hindering. Again, we inch up, just outside each others ranges. I stay in hindering so he’s not able to shoot at me and has to come in close. We end up taking out each others whole forces and it comes down to a hurt Nick the Fury and a hurt Thanos. I had an infinity gem from killing Big Boss Hill and kept upping my defense, unless he was double tokened, then I would do my attack. It was literally going to be next to hit their attack roll would win. We both kept missing. Eventually, I was able to hit and won the rematch, 290-115. Top 4 I faced Ricky. This was the only team I didn’t snap a picture of so I don’t remember the details. I know he had Witch Queen Le Fay and the Baron Spiderman. There were 2 other figures I don’t remember. I was able to kill those other 2 figures, but that was it. The pulsewave from Witch Queen was too much for Thanos and Ricky made quick work of the team. I lost 290-75. All in all, I’m happy with making it into top 4.

As always, I love playing this game and can’t wait until the next big event, Worlds!