It’s been a few months since I’ve written a tournament report! On Sunday I went to Comic Book Addiction in Whitby, ON for Ontario Provincials. This time around it’s the only one I’m able to make it to, unless I can find someone who wants to carpool to Erie, PA this Saturday…. There was one in both New York and Michigan the day before, but I wasn’t able to carpool this time around. 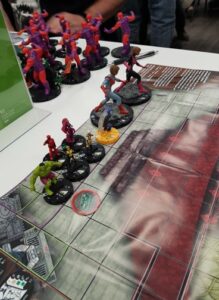 This round of States/Provincials was Pauper and Highlander format – meaning you can only use figures that are common, uncommon and fast forces with no primes and you could only use one figure with the same name and set number. I was really wanting to play something a little different that I didn’t think was going to be seen, so I was building a team around FF Shredder and some other pieces that were hard to KO.  I was very stubborn in wanting to play it, even tho in most playtesting I did, it wasn’t winning and it was such a different play style than I usually play so it felt awkward for me to pilot.  So 2 days before the tournament, I decided to go with Avengers instead.  I was having some super fun roll20 parties with Nancy, Josh and Jesse, where we all strategized and practiced with Jesse’s version of the team and I saw how well it was doing against things we were playtesting and it’s also very much my play style.

Sunday morning Mike picked me up and we were early so we went to Timmies for breakfast and passed the time by looking at the cards of WWE figures to better familiarize ourselves with the new hotness that we knew some people were going to show up with.  It was very helpful to have some of that knowledge fresh in our heads. 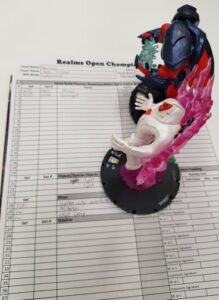 So the team I played was Voyager, Medusa, Crystal, FF Hulk, 40pt regenisis Beast, A.I.M. Red, 20pt Giant-Girl, 10pt Giant-Girl, WWE Ring and Stark Tower map bonus. Round 1 I was paired with Kyle.  He was playing Nimrod and Onslaught.  I won map and we went to Stark Tower.  I rolled for an Iron Avenger with Crystal and got Bolt.  Moved up Hulk and Beast so they were closer to get into the action in the next few turns when needed.  He moved up Nimrod and Onslaught into one of the side hallways. I pushed Crystal to make another pog and to get perplex (those first parts were the same in every game I played pretty much). I got Voyager and the homies (Crystal/Medusa/A.I.M. Red – Josh, you’re rubbing off on me with saying the homies for this group!) by his Onslaught and perplexed down his defense. The hair hit and so did Crystal, both with Empower and took him out.  I don’t remember the specifics of the rest but I know I flew away with the homies to regroup.  He went over to my Giant-Girls and I came back in with everyone and managed to take out his Nimrod.  He’d KO’d A.I.M. and one of the 50pt pieces making the final score a W for me 300-70.

Round 2 was with Matt.  He was playing Nimrod, Danger Room Magneto, 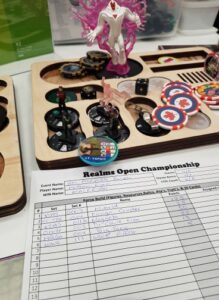 Dr. Clair Finn, Ensign Crusher, Big Tony and the WWE Ring.  I win map and bring us to Stark Tower.  I lose my Ring as both can’t be placed on the map.  I move up Hulk and Beast.  Get Bolt again.  He moves up a little and shoots a piece of blocking terrain so he can better get through and moves into the ring with most his guys.  I come over with Hulk and Quake his Ensign and Crimson Sage (consolation) and KO them both (the knockback got Ensign).  Then I flew the homies over to the other side and the hair takes out Big Tony.  Crystal Quakes to hit Magneto for 1.  Matt misses with his attack.  Hair pushes to hit Magneto again.  New hair also hits him.  I roll for a pog with Crystal and get Crimson Sage – who spawns adjacent to Magneto and punches him.  Crystal free Quakes to take him out.  He clears Nimrod.  I hit Nimrod with the hair.  Then outwit his defense and hit with Hulk using the heavy object.  I get enough attacks in that I’m able to KO him and he never once rolls higher than me.  I’m about to go get Dr. Clair Finn but time gets called.  I win 265-0. 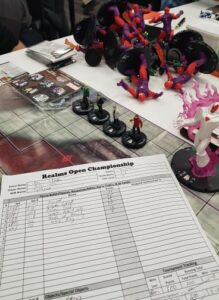 Round 3 is against Jason.  Surprise surprise, another Nimrod! He’s playing his in a Sentinel team with Graydon Creed, Bolivar Trask, Senator Robert Kelly, Friends of Humanity and a WWE Ring.  I won map again and again to Stark Tower and again I don’t get my WWE Ring.  I try for a pog with Crystal and move up Beast and Hulk a little.  He tries to get his Leaderships off to get out a Sentinel and moves up Nimrod into the Ring.  I move Voyager and the homies halfway up the map, but in one of the hallways down the side so Nimrod can’t see us.  He tries again for Leaderships and moves his little guys to the opposite side of me so Nimrod would be able to see me if I move my team over to them.  I do.  I’m able to take out 1 or 2 of the little guys and Sidestep a few of my guys to try and keep them out of Nimrods sights. He misses with his Nimrod attack.  I take out the rest of the little guys and get to work on the Nimrod.  I outwitted both his defense and Shape Change and hit with Hulk.  He KO’s Hulk and 2 of the other 50pt pieces but I managed to take out the Nimrod as he couldn’t roll any attacks higher than me.  I won 300-150. 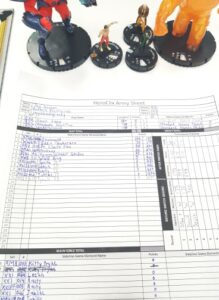 He warns me not to use my Stark Tower map as he’s got all the Barrier in the world to keep me away.  I wanted to try it anyways because I wanted some protection as I moved up.  I figured even if I lost, I was feeling confidant in the amount of points I had and still having another round to be able to make the cut so I took us there anyways.  As promised, he set up a bunch of Barrier.  I found a way that I could get to him with the homies but I wouldn’t be able to get the Empower with it.  I Sidestep Crystal down to try and take out the pog and Proteus but they both roll Shape Change.  I then Sidestep Medusa and make the hair to try to take out Proteus and with all his Prob, I end up missing.  He starts his Mind Controlling and making my figures take each other out.  I wasn’t able to hit any attacks I was able to make. Only scoring 2 ID card points, I lost 175-6. 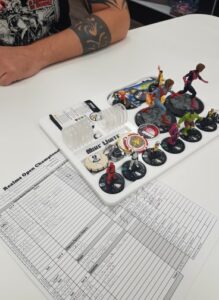 Round 5 is with Mike.  He was also playing an Avengers team.  His version was Voyager, Medusa, Crystal, Hulk, Mud Man, Giant-Girl, Giant-Girl, A.I.M. Red, A.I.M. White and 3 ID’s.  Mike wins map and takes us to Galador so I can’t place my Ring. Mike has an extra Perplex on me so he’s got more swing than I do. He Sidesteps up a little and moves up to just outside my reach.  I stay back in my starting area and just move Beast up a little, carrying him there with Crimson Sage so my Prob would be more central and trying to use them as bait.  He decides to come in for it and hits with Crystal, taking out Crimson Sage and hitting Beast.  He decides to focus on him and misses his attack after I theme prob him out of a hit.  I think I went through most of my theme probs trying to keep people as healthy as possible. I have a big turn where I think I get out 3 of his figures, giving me the lead.  He comes back and takes out a few of mine.  This was such a close game and back and forth with no clear winner till we got close to time being called but I was able to eventually get his last piece down and won 299-215.

Made it to Top 4!  I’m second seed going in and my opponent is Keith. 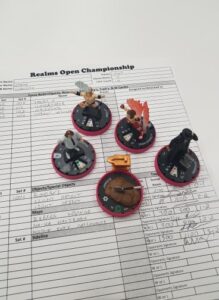 He’s my first WWE match of the day, other than the 1 figure on Jay’s team.  He was playing Triple H, Undertaker, Mankind, Shaun Michaels and a Bloodaxe. I won map and we go to Stark Tower.  I do my usual opening and he uses Grand Entrance to move his figures up, splitting them all up.  One on each side, one up the middle and one hanging back.  Undertaker is who’s in the center and I start with him.  I get off enough attacks to take him down.  He moves over with Shawn Michales to try and take out Hulk but misses his attack. I’m able to get him out on my next turn.  He moves the other guys closer to me to get tokens on them to hopefully be able to pull off signature moves.  I’m able to take them out my next 2 turns and I won 300-0.

Top 2!  Rematch with Jay.  This time I decide to try the WWE wide open map instead of Stark Tower.  I didn’t want him to be able to Barrier in with better positioning this time.  I quickly realized that his swing was much greater than mine so he was definitely going to reach me first.  I token Crystal so I’m able to push her to Perplex. I know that he’s able to Sidestep everyone with the pog there, so in a turn or two he’ll be able to reach me anyways.  So I decide to say screw it and move up to the middle of the map, into my Ring.  He Mind Controls and I use the Ring to re-roll his hit but he still hit on his next roll.  Being wide open, he was able to get all my guys super easy, except for Beast who kept choosing Battle Fury. He actually made an attack that wasn’t MC this game and I was able to Retal with the Giant-Girls, getting Eddie down to his last click but I wasn’t able to take him out. We didn’t even make it to time when he’d taken out my whole team and I lost 300-6.

Huge congrats to Jay for winning!  Going 7-0, the team he built to specifically work against Avengers also ended up being really strong against the rest of the field too.  I feel like I played it the best I could and made all the right choices (except for forgetting to heal Giant-Girl when she KO’d something against Mike) and I’m super proud of how well I did coming in 2nd.  I managed to take out all the Nimrods and my only losses were to Jay, who won, so I can’t complain!  As always, we had a fantastic group of players who all kept the games fun and a huge thank you to the staff at CBA for running another fabulous event.  The 2 chases I chose as prizes were ones that I was still missing and wanted too, so bonus!