This is the year of cons for me! With still being off work and the ability to carpool and share rooms multiple ways, I’m definitely taking advantage of all this free time before I start back working to do all the things affordably.

This is my first time going to Gencon and all the stars aligned to make it happen. I decided about a week before the event that I wanted to try and see if I could get there. Locally I only knew of 2 people going and both the cars they were in were full. So I put the word out that I was looking to carpool. A friend of mine reached out to a friend of his who put the word out there that I was looking for a ride and someone he knew saw it and passed the word on to someone he knew who had a spot in their car they were wanting to fill and I got connected with Hans who willingly added me as their 4th.

I left nice and early to make the trek out to Aldershot GO station where I was to meet them and off we went. Everyone in the car was friendly and as we approached Indianapolis we figured out where everyone needed dropping off and I was first where I met up with Jay and Chad.

1st day of Gencon and WOW was it ever busy! Way more crowded than any 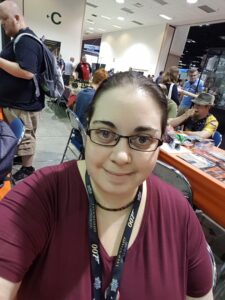 other con I’ve gone to. Multiple people warned me of how busy it was going to be, but seeing it is a different story. You all know me by now, I’m just there for clix and the ROC was running events so I stayed in that area the whole time and didn’t explore the con at all. This day I played in a Win A Map and there were only 4 signed up so we each faced each other. I think I came in 3rd after facing Lucas who beat me very quickly, Adam who learned me all about Beta Ray Bill and David who hadn’t played in a while. I also played in some Battle Royals.

2nd day started with another Win A Map with again just 4 people and where I came in last after I again faced Lucas but this time I actually put up a fight but still lost, Jaylen with his full point Uni that a Big Tony (!) managed to pop but I didn’t have a follow up to take out any Eternals and then Daniel in a pretty close match till the end when he got me. In the afternoon we played in a really fun 2×2 sealed tournament. I kept asking people if they were looking for a partner but most people already had one. I 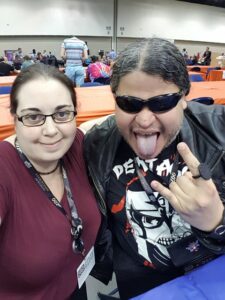 finally found someone to join me – thanks Ricardo for joining me! We got our 4 packs and right away a team jumped out at us of Challenger, Proxima Midnight and a SHIELD Diplomat. He felt comfortable with the tentpole so Ricardo took that team. I looked at what was left and separated into Wakanda and Avengers keywords to see what was best. There wasn’t enough points for a Wakanda team so I went with the Avengers team of Voyager, AIM Red, AIM Blue, Iron Man, Black Widow, Crystal and Captain Marvel. We did have the opportunity to mulligan but chose not to. We ended up going 3-1 in the Swiss rounds and made the cut to top 4! We again had the chance to mulligan if we wanted but chose to stick with our teams. I got to face PJ for the first time in top 4 and he won it after a really close battle that never had a dull moment. This format was a blast! I love playing in teams. The only thing I wish (not that it affected us in particular) was that it went by wins/losses and then points vs just points.

3rd day was a sealed Win A Map and I thought I was going to do really well with what I pulled. I was playing Spider-Man, Rune and Black Widow prime. Dice just didn’t want to go my way in any of the matches. Between not getting any Shape Change rolls and crit misses and missing all my alphas, I ended up coming in 6th by going 1-2.  That afternoon was the big event, the Regional.  I’m of course playing my Vulture team 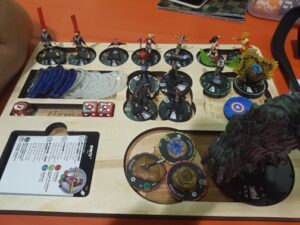 that I played at Canadian Nationals. I didn’t write this as quick as I would have liked, so I apologize if I’m forgetting details in games. (Thank goodness for the WIN to tell me what final scores were and that I took pictures of build sheets to help me jog my memory!)

Round 1 was against Trent who was playing a Cosmic team of Mister Oz, Rune, Photon, Groot x2, Soul and Power gems and ID’s with the Stark Tower map bonus. I loved the little trick he was going for.  He was using Photon to bring over the Leslie Evans pogs that he gave me, so Rune could KO them so he could heal up.  First turn he grabs the gems and equips. I grab my objects and equip and safely Sidestep up, hidden behind all the walls. He does the Photon trick to heal Rune the first click.  I Sidestep up my group a little further and retal with Groot.  I miss Rune so I power action attack one of his Groots with my Groot and hit this time.  I use the Walking Wood to take out the other Groot.  He brings over the other Leslie for Rune to heal again.  I decide I’m close enough now to make it over so it’s GO turn for me.  I perplex up Vulture to a 14/5 and away I go.  He misses Shape Change on all 4 walking woods so I stack up a ton of Charges and go thru his team.  I won 300-25.  1-0. 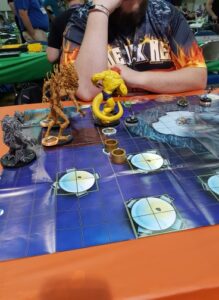 Round 2 with Lucas for our 3rd match of the weekend. He’s running a Cosmic team with Starfox, Collector, Mister Oz, Mangog, Groot, Flora x2, Mjolnir, Remaker, Nightbringer, ID’s and Iceberg Lounge map bonus. So again I did something different from the other 2 games we played.  I did a different placement of my objects to try and make it more difficult for him.  He could still get to them but he would have to overextend more for it.  He came right up turn 2 and called out a Professor X to try and cripple me, needing a 5 or a 6 I think and missing after all re-rolls. That gave me the opening I needed.  I outwitted Shape Change on his Walking Wood and Professor X to build up Charges and away I went through his team.  I won 300-12. 2-0.
Round 3 I was facing Adam playing a Cosmic team of Kobik, Unseen, Trader, Groot, Flora, Suited Henchmen, Remaker and ID’s. He put us on Galador.  I don’t remember a lot of this game. I think I may have rolled a 6 on Lockjaw at some point and he died that way? Between him Outwitting my Charge and the elevation changes and him being able to Sidestep and carry the team away to other elevations, I just couldn’t get to him and he was able to pick off my pieces.  I lost 300-8. 2-1.
Round 4 was with Kalder.  He was playing a really fun Gotham team with ff Joker, Kite Man, Maxie Zeus, Controlled Batmobile, Big Tony x2, ID’s and Haha Hacienda map bonus. He sent Maxie up on the roof with Kite Man to make his Stone Harpys and brought up the Batmobile carrying Joker and Leslie Evans.  He outwitted my Charge with Leslie.  He was however, within Sidestep range of Vulture because he came up close, so I pumped up Vulture, Sidestepped to take out Leslie and 2nd attack on the Batmobile to knock it down a little.  Then I went over to the Stone Harpys to build up more and took out Maxie and Kite Man while I was over there. From there I went to the Big Tonys.  Then I charged back over and with my built up charges was able to get through the Batmobile and Joker.  I won 300-5. 3-1 which got me into the top 4 cut! 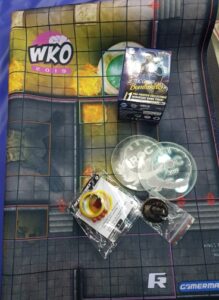 Top 4 was a rematch against Adam.  Again he puts us on Galador.  This time I try and protect a little by putting up Barrier with Lockjaw, but I didn’t position it quite right and he was still able to get into a position to Outwit me.  I did manage to protect myself a little better for the game but I still ended up losing 56-0.   I’m just stoked to have made top 4 and to get one of the Kings Tomb maps!  I ended up 3rd against a totally staked field and I had a ton of fun.

Last day was just battle royals, ending with a big group one with all the volunteers which was so fun!  Also, a local friend came by and offered me a spot in his car back, but wasn’t leaving until the next morning – which means if my random friends who I came up with didn’t mind me not going back with them and if I could find someone to crash with for the night, I’d get to hang out longer and travel back with friends – Jay was in this car going back too.  My new random friends were cool with me not going back with them and I found friends to stay with for the night, so extra time away!  Yay! So out to dinner we went and did some Pokemon GO hunting/raiding on the way.

Great weekend overall.  I’m glad I got to experience Gencon for the first time.  It was great to see everyone and play tons of clix.  Next big event will be Worlds!  Can’t wait to see everyone there!