I was really glad that I was able to get into the last SLOP event. I’m really wanting to collect as many tarot cards as possible so that was my go-to for prizing. I didn’t take much else, unless I was missing it and didn’t bother with the participation prizing as I know I’m playing in 3 events locally and will get them all at home. My luggage space was at a premium so I didn’t want to take more than I could bring back. I had the most fun ever calling out all the 5’s that were rolled to help everyone remember rally dice and everyone at the tables seemed to love it. I did absolutely terrible but had a blast. I ended up coming dead last in 40th spot – and getting a legacy card for being in the bottom half, opening an Iceman, which I wanted and didn’t have yet.

As soon as it ended, Mike and Tom left to catch their flight. Instead of getting in on one more battle royal, I went over and watched finals of the singles tournament between Isaac and Saúl. Brad was sitting next to me live streaming the match and handed the phone to me partway through the match cuz he had to get up for a minute, so I ended up filming the 2nd half of the game for him. It was such a great game to watch and there was amazing sportsmanship with them letting each other do things if they remembered after a moment. Congratulations to Saúl for pulling out the win!

After it was over I found Emily to see when she wanted to get our game in but she was super busy, so we said we’d meet up in the hotel later. Because my knee was still super stiff and sore, I went to wait for the shuttle back to the hotel instead of walking this time. John was out there and waited for shuttle with me and we had a little chat with Kalon who was also there about our match yesterday. When we got back to the hotel, I didn’t see anyone hanging around the lobby area, so I went up to the room for some quiet alone time to recharge and start putting my bags together and organizing my stuff. No one messages or reaches out at all for 2 hours while I’m doing it and I get my much-needed break to re-center. 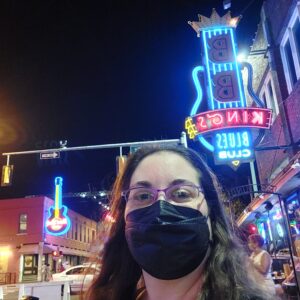 At 6 I message Jocelyn and ask what she’s up to. They’re at a BBQ place already and not around. 2 seconds later Adam reaches out and asks if I want to go out to dinner to a BBQ place on Beale with him and a couple other Wizkids volunteers. 2 seconds later Chip messages me and asks if I want to go swimming. I’ve never been to Beale Street before and I was hungry, so I said yes to Adam and let Chip know that I’ll come down and meet him at the pool once I’m back. They wanted to go to BB King Blues Club for BBQ. It was really good food. I got the pulled pork platter with baked beans and coleslaw. There was also a live band playing and they were really enjoyable to listen to. After dinner we walked a block to the Elvis statue then headed back to the hotel.

Chip is still by the pool when I get back, so I make my way down to meet him and run into Kalder talking to the world champ Saúl which gets me sidetracked and end up chatting with them for a bit and taking some pics. Saúl was excited to meet me from knowing I won Canadian Nats and said I was the reason for him needing to pay $35 to find a rare Sprite because he loved the team I won Nats with. I finally make my way down to Chip and he’s with Brad and Matt and we chat poolside until it closes. I would have loved to hop in the pool, but it was soon closing so I just hung out with them instead. As we make our way in, Chip buys me the cider that he had been wanting to get me to celebrate – he’d been talking about it for months when we chatted online. We end up with our drinks in the lobby joining a conversation with Mike Eskew, Louis and Spencer till 1am. I make my way up to the room, have a shower and let Brad know I’ve gone up to the room and he’s up by the time I’m done the shower. We had a great conversation that kept us up till 5:30am and I really enjoyed getting to know him better.

Only getting 2 hours sleep, I meet up with Jocelyn and Rob to catch the shuttle to the airport at 8. I end up checking a bag home and using a small folding duffel to get fit all my purchasables, participation and winnings home as my new carryon. Security was super quick and easy. We got in and went for breakfast while waiting for the flight. No delays this time thankfully, so this means a 2.5 layover in Charlotte with plenty of time to go for lunch. It was awesome having friends to travel home with – definitely helped ease that anxiety that I had on the way down.

I’m super proud of myself for stepping out of my shell a little to make the trip alone – and arriving a day before and staying a day later than my local friends. I had a whole bunch of social time with people I don’t think would have happened the same way otherwise and having that experience was fantastic and I think will make me more likely to try it again in the future. So many of the people I was hanging out with were people I had only had interactions with online and had never met in person. You wouldn’t be able to tell though just by looking at us all interacting – you’d think that we’d met hundreds of times before! As one of the few women in the community, I feel grateful that it’s such a good group of people, I feel safe with them and know that they have my back against the few who aren’t. I’m also super proud of how I played. I’m a little sad that I never got that fun casual game in with Wizkids Emily, there just wasn’t any down time to fit it in – hopefully next time!

I can’t end this without giving a shout out to the The Dial H guys. They were amazing with their media coverage. I know they grabbed me for multiple sound bites, so I’m sure to be scattered through a bunch of the videos as they come out. Check out their YouTube here and subscribe if you haven’t. I also want to thank the Wizkids staff and volunteers for putting the event on and getting us awesome in person play again. Your time was appreciated and it was great seeing you all again!

Now that I’m home, I’m grateful that I’ve managed to avoid COVID from this trip. After getting home, there were reports of people testing positive on their return and I was very much a close contact with a few of them personally – not to mention the hundreds (literally!) of hugs I had with so many people! I’m so glad that it was fairly mild for all of them who got it.

As for the next event I’m planning to travel to – I’ll be at the ChampionClix Open in Florida in January. Hope to see you all there!