Double digits. When I started writing these weekly memory and feeling recaps of how I’ve spent and fared in this pandemic, I didn’t see this far ahead to think how long it really would be… but here we are, week 10. I mean, I’ve felt that this lock down was going to be a long time right from the beginning – when a lot of people were were thinking it was going to be a short time. 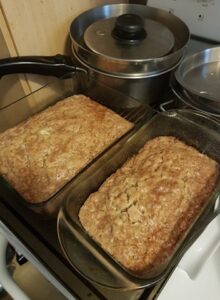 This week started good. I had energy and felt motivated and got some stuff done. I baked 2 banana breads early this week. They keep coming out better and better each time. I don’t follow a specific recipe and tweak it each time. I dump a ton of cinnamon in it and never measure. I also sprinkle sugar over the top before it goes in the oven and it creates this super yummy crust on it. Funny story from the past – when my son was little he used to sneak into the kitchen when I made banana bread and he’d eat the crust off the whole thing and refused to eat any other part of it.

I also started sewing some masks. A lot of places are making them mandatory, so I want to be ready for if I eventually venture out somewhere. I’m also making some for the extra house guest who needs some for her flights in 2 weeks. Also, I’ll be mailing a few to my mom so she can have some on hand for when she’s ready to go anywhere – she’s been isolating like we have and hasn’t left her house too. I’m just waiting on some plastic coated wire pieces to sew into the top for the nose piece.  I ordered them about a week ago, but they’re coming from the US, so hopefully they arrive before the flight in 2 weeks – otherwise there will be no nose piece in hers.

This week also had a bit of a blast from the past. Someone from high school messaged me and it ended up turning into some great catching up and conversations. It felt awesome to share some memories (him more than me.. I have that terrible memory), catch up on whats new in our lives and share some laughs and smiles.

I’ve done really good with keeping up with my walks at least every other day too. It all depends on my mental state that day and if it’s raining or not.

I did end the week struggling though. My sleep went back to being terrible after actually getting close to 8 hours a few days in a row. Less than 4 hours one night. Forced myself to stay up and not nap to hopefully help the following night but it didn’t help. I did get about 7 hours, but I woke up every 30-60 minutes, no exaggeration, so it was terrible broken sleep that I didn’t feel rested from at all.  Those days that follow the terrible sleep are always worse mentally.  Super numb and really get nothing done at all.

As you can see by no additional blog posts this week, I didn’t get any of the tutorials filmed that I have planned and I also didn’t go live in my VIP group to unbox my latest order that arrived early this week. I just couldn’t get that motivation up enough to do any filming. Fingers crossed I can get to some filming this week – I have a list of ideas that I’d love to get some done.

That’s about it around here this week. Hope you’re all holding up as well as you can be out there.