Another week down. I realized after I posted last week that I didn’t start with a state of the pandemic blurb to start. I guess because it all just feels like the new normal with nothing changing all that much. It’s still there but a lot of people are living like all normal still. I’m noticing more and more going without masks but I’m still not that comfortable going without and grateful that places I’ve been going have mostly restrictions to wear it in place, even though the mandate has been lifted most places.

This was a therapy week, and as always it was a perfect timing to work through things. I always write my notes of things I want to touch on so I don’t forget anything (me and my crazy mind that keeps forgetting things if they aren’t written down). Having feels around so many things from relationships to work to anxiety and the exciting wins from moments of confidence and stepping out of comfort zones. It’s crazy how anxiety can take me from being able to do something to frozen and taking 2 steps back. But slowly I’m able step more and more. I can feel the growth from how I was 20 years ago to 10 years ago to just a few years ago to now. 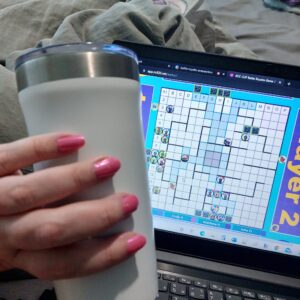 This has been a bit of a quiet work week with the side biz for sales – BUT, I did have someone join my team! So that’s super exciting! I also finally did a new mani and used one of the strips that I got in my little goodie bag from the conference I went to. It was an exclusive strip that’s not currently available and I just love the shade of pink with the hint of glitter.

As you can see I also played some Heroclix online this weekend. There was a charity event going on and most of it was in person in Huntsville Alabama, but they opened up some battle royals online. For those that don’t know, a battle royal is a game with 4 players on 1 map. You each open a booster, pick a figure and pass it to the left. You keep picking and passing until you have 5 figures and that’s the team you’ll play. The game is played for an hour and whoever has the most KO points wins. All the money from the battle royals (and the in person play and auction) are going to support a charity for Huntington’s. The prizing for the games is first player gets a choice of exclusive pog (either last years one or this years new one) an everyone else gets a random legacy card or team-up card. I said I wanted to play 10 games over the weekend, and I did! I’m excited to be getting the new pog in the mail (I already have last years one from winning fellowship last year in my prizing). It was SO fun getting to play a bunch of games with old friends and new. I really didn’t care if I won or lost and was just enjoying playing them game – but I am glad to be getting one of the pogs. We used a new set that’s not out yet and it was great to learn what some of the figures do – even if it was a little more difficult without the figures in hand. As much as I loved being able to play online to be a part of it all, I do wish I could have been there in person and playing in all the events – hopefully I’m able to get to a big in person event sometime soon.

Have I talked about my house construction going on? I’m getting a few things done – starting with the front porch/mud room. It really was close to falling apart. The stairs didn’t feel sturdy, the floor felt like it was sinking and it just needed to be done. I got a quote from the neighbour who moved in next door who has a construction company and is completely gutting and redoing his new home with his crew. He started on my front a few weeks ago. Once the front was demo’d, we discovered that the foundation wasn’t waterproofed and anything above soil was receding. So I added on to the work and got them to dig it down and properly waterproof it. I wouldn’t want a potential basement leak in the front to happen in a few years and have to undo the work of the new porch. It’s now back up and framed – but when they got to the top and took off the gutters, they found a squirrels nest up there near the roof and also that the roof wasn’t done correctly. They don’t see a barrier layer under the shingles and the wood underneath is rotting. So now I get to also add on getting the roof done. It’s sure adding more and more to the cost of the project and I’m grateful for having the line of credit to fall back on for it if it gets much more, but so far it’s just within budget because I took out a little extra in case things like this happened. I can’t wait to see what it’ll be like when it’s done!

I hope all the mama’s reading this had a great Mothers Day – I did with getting to play Heroclix online, relaxing in a bath and a delicious peach bellini in that insulated mug with lid in the picture (we don’t need another story of a drink being spilled on the laptop!). The kiddo gave me some great hugs and surprised me with a slushie when he walked to the store and didn’t complain that I wanted to play Heroclix most the day.

That’s pretty much me this week.