Anyone else Pokemon GO players? I participated in GO Fest this weekend – something I’d probably never do if it wasn’t for the home pass as I’d not travel for it, so unless they hold it in Toronto, I wouldn’t go. I finished all the quests and got all the Pokemon’s available but ended up only getting 1 shiny – and it was one I already had. I did get a hundo Chansey, but that was my only perfect stat catch. I had fun though and it was a great distraction.

This week started super rough. I listened to a different meditation early this week (I’ve been adding new ones into the rotation for change) and one of them really hit me deeply emotionally and it’s something I’m definitely going to bring up at the next therapy appointment. That day I literally didn’t fall asleep until 9 the next morning and was sobbing crying for so long. I’ve really been working hard to gradually fall asleep earlier and subsequently wake earlier so I can be better prepared for if/when we move to stage 3 and I go back to work. The closer it’s gotten to the end of the week tho, the better it’s gotten. I started with sleeping from 6-8am-noonish and I’m now about 4am-10am the last few days. I know it takes a while sometimes for routines to become habit, but my sleep routine seems to be better helping now that I’ve been doing it for almost a month. This is the longest I’ve ever gone with sticking with it for this long in a row – meaning I’ve actually been taking my vitamins every single day because I’ve worked that into my sleep routine and I know consistency is key with having them work properly or to see differences. My goal of bringing it back to a 2am-ish fall asleep time is getting closer.

I made myself a new wallpaper for my phone. I took the list of positive self talk phrases I made last week and turned them into an image that I’ll see every time I use my phone. I’ve done this in the past with goals I wanted to reach and it really helped keep them in constant thought by seeing them all the time – so I figured I’d try with my positive self talk. Just like the post it note idea of sticking them all over the house, but instead digital on my phone, where I’m constantly looking. Even if I’m not sitting there reading the list over and over, it’s getting absorbed into my thoughts as I see the screen. 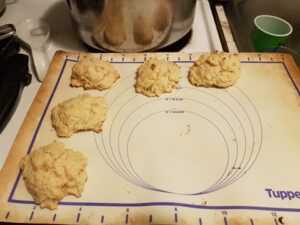 The last few days I’ve actually been feeling minimal depression/anxiety (back to normal livable levels vs the frozen in place levels of late), so I actually got some stuff on the to-do list done. A little more organizing got done (the closet in my room officially cleared out and now has all the bins of retired heroclix instead of the floor under the table in my kitchen – although the top of the table still needs organizing and clearing). A bit of cleaning happened too. Also baked! My bro made homemade chicken soup, using our Oma’s recipe, so I made some garlic parmesan biscuits to go alongside them and they were delicious.

I ended the week with a little online social interaction by being a spectator for a heroclix game. I really miss playing and I feel like I might be up to trying to play sometime soon if I can figure out a team I want to try out. I really want to try playing in the ROC online nationals that are happening in a month, but with the uncertainty of how things will look in a month, it’s too early to know if I’ll be able to. But if I feel up to it when it gets closer, I’d like to have a team I’ve at least practiced a little – so I’m hoping I’ll get some mental energy together to try out a few games.

I love that I’ve had a few days of not feeling so bad this week and really hope that continues into this week.