Woah.. the end of the 4th week since this COVID-19 was declared a global pandemic and 3 weeks since I’ve left the house. Seriously.  I haven’t even gone for a walk. I will be going for a very short quick walk at some point soon to the mailbox to mail all these cards I’ve been writing though. I’ve got a whole bunch of them written and ready to go. I was going to get my brother to drop them on a grocery run but we’ve mostly been doing instacart with the exception of I think just once in the last month.

I’m still spending about 90% of the time in my bedroom for my own sanity as my house is still extra full and will be until the flights open back up across the boarder. I’ve done a few things for the area of my bedroom though. I cleared off the sewing table that was piled high with stuff so I have a place to not just be in bed all the time and now can work on the laptop and write at the desk. I do need a power bar for that corner of the room though. Ordered one online and it says it’s going to be a month before it arrives. So for now I’ll just keep unplugging and rotating what’s being used in that moment. 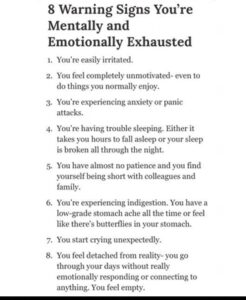 Mental health for this week has been more numb than anxious.  I read a post that I took a screen shot of about being mentally and emotionally exhausted and it really resonated with me.  Especially number 2 – I’ve literally only played clix online once for that qualifier.  I normally would be willing to play anytime.  I just haven’t had the mental energy to do it.  So I’ve been watching people play in the WAM’s instead because it’s less energy to watch.  Number 4 is big for me – there have been many nights that I’ve been up until 5-7 AM.  Number 6 ties in with number 3 for me – I’ve always had stomach issues in relation to my anxiety.  But I’m noticing that I’m needing my digestive enzymes and tums more than I usually would need them.  Number 7 is legit – this has been many times for me.  A friend reaching out? Tears.  Coming upstairs from downstairs? Tears. Not every time, but enough that I question what’s causing tears.  Number 8 – that ties right in with that whole numb feeling.

I also somehow hurt my back this week.  Mid to upper area.  I felt fine and when I went to stir one of my baking mixes it started to hurt and has been hurting for a few days now.  Hot showers, pain meds and creams on board to hopefully help it heal.  Speaking of baking, I completely forgot to take any pics but this week I made more of those dinner rolls to have with leftover soup, cornbread to have with chili and a lemon loaf.

I’m loving that I’ve had more time to create more blogs.  This week I made a tutorial video I was able to get that blog post up (now edited out) and I also made my Roll20 for Heroclix tutorial blog post.  I’m getting great feedback on it and it makes my heart happy that people are seeing value in it and it’s helpful to them.  Thank you Mcconnell, Weston and Jay for looking it over for me and giving me feedback on it.

A few positive things to round out the week – I started opening my curtains in my bedroom to let the sunshine in.  I need to remember to do this more often. Also, the other night it was raining a whole lot.  I could hear it hitting my window.  I love the sound of rain so I turned off the TV, shut off the light, closed my eyes and just enjoyed the moment of listening.

I’ve done better this week in regards to how much news I’m watching too.  I’ve kept it to about 2 hours and then shut it off.  I catch the Prime Ministers live address and then the Provincial live question and answer period right after and a little of the Toronto news after that and then off it goes.  No watching the million hours of recaps of those same bits after like I was doing before.  Instead I put something mindless on YouTube or Netflix or a podcast so I have some background noise as I get other things done.  It’s creating a better balance.

I suppose that’s about it this week.  Thanks for reading along with my weekly journal accounts of the weeks.  I have a terrible memory (in fact, I make a note of what I want to include in this even so I don’t forget) and if I don’t write about it and have something to look back on, I won’t remember details down the road.