This weekend was the start of being able to download a QR code to use for entry into non-essential places instead of showing the paper vaccine.  It was also the lowest recorded cases this weekend in the last 2 months.  I really hope this means a downward trend and continues.

What was supposed to be a long weekend, turned into needing to work a half day for some training and then turned into working the whole day because someone couldn’t make it in and no one else could come in and cover. That’s okay though because we did our Thanksgiving on Sunday and I didn’t have any specific plans at home for the Monday anyways. I will say I’m not complaining about the extra pay I’ll be getting for working a holiday – especially after missing time off and the last cheque being terrible from when I was in the hospital.

I had an appointment with the clinic doctor on Thursday to go over the blood results for the anemia. It’s still low, but better than it was in the hospital.  I need to just keep doing what I’m doing and he’ll re-check it in a month.  There was one test he requested that wasn’t done for some reason and he said he’ll just re-request it again on the next blood draw.  He wants to make sure that it’s not something more serious.

Afterwards, I had dinner with Sarah for the first time in a year.  It’d been way too long since we’ve done that.  Pre pandemic we used to go at least once a month if not more often.  We did our usual of Swiss Chalet chicken and then drove over to McDonalds to get drinks and sat in the car to talk a few more hours.  Its so much easier to have these gab sessions in person instead of little messages.

Friday I had my follow-up appointment with the OBGYN ER doctor at her clinic.  She said everything looks pretty good and she’s happy that I’m no longer in pain.  She wants me to have another ultrasound at the end of November and see her again the beginning of December.  I’m hoping that everything is completely clear and healed because if there is any residual pus or inflammation then she’s going to recommend surgery to remove it so I don’t keep getting infections a few times a year from it. So fingers crossed for my body to heal things completely in the next month! I was able to talk to her about the bowel issues I’ve been having since the antibiotics and she said it’s normal and didn’t give me anything for it and said my body will get back to normal, it just takes some time.

I got to play heroclix Saturday – but more importantly, I got to hang out with a whole bunch of friends, most of whom I hadn’t seen since the pandemic started. The only store having events is in Brampton, an hour away, but thankfully Mike currently has access to a vehicle and lets me car-pool with him.  This was a weekend of getting my fill of hugs and I certainly felt the love from my friends.  Heck, Amber and I teared up in our embrace that didn’t break for at least 30 seconds. I even got surprised with seeing Jay too.  He wasn’t able to make it until the last minute and shocked us that he was able to be there.  His ride that brought him up wasn’t able to bring him back so he travelled back with me and Mike and ended up coming back to my place and crashing for the night. But back to the event!  It was a sealed event playing for convention exclusive Master Mold. I wasn’t worried about winning it as I have one coming and was really just there to have fun and see everyone.  We could choose any set that they had on the shelf and I chose SVAC because it’s the set that I was missing the most pieces from.  Unfortunately I didn’t pull anything that I didn’t already have.  I did get to make some trades after though and was able to fill some holes in the collection that way. I ended up going 1-2, winning my first game then losing the next 2.  I got to play 9 of the 10 figures in my boosters – 7 on the main force and 2 by secret identity. Later that night at my house, Jay and I played a casual 500 point game, where we just had fun with no timer and played it out to the death. 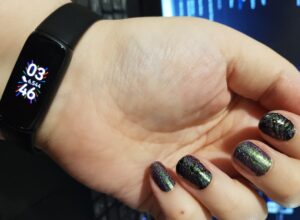 I also took the time this weekend to do a new mani.  I really wanted to film it for tutorials, but I didn’t plan my time very well and was rushing through it.  Maybe next time. I snapped this picture of it for my social medias. I put it up along with the caption of actually getting close to my daily step count on a Sunday. I don’t usually get to my goal for steps on the weekends as I don’t build it into my days like I do when I’m at work and walk after before getting on the bus to get home. So it felt good to see those numbers today.

Speaking of walking, I’m getting between 5000-7000 steps a day now.  I still haven’t started back the yoga yet, but I will as soon as the bowels situation gets back under control.  It’s too uncomfortable still.  I’m still on track though and officially down 20lbs since I started back to work 3 months ago.  Slow and steady – exactly how I want to be doing things.

That’s about it for me this week – all kinds of busy between all the friend love and doctor appointments. A definite welcome distraction from the stress and anxiety I’m feeling around work.