The positive case numbers are slowly climbing again. I’m noticing when I’m out that a lot of people seem to be living like everything is back to normal. Not being as concerned with keeping distance and less mask wearing happening. I’m sure it has to do with the weather getting cooler again and people moving indoors for their activities again as well as more things opening with higher capacity limits again.

This week was a very social week for me. I felt like I had more conversations and meetings than I normally get in, in any normal week. I had a few long text conversations with a few friends over a few days. Thursday I played a game of Heroclix on roll20 with Mike. Saturday I went and visited Jay. We had a great day of going out for lunch (I treated him for his birthday as well as baked some blondie brownies to bring him), played a casual Heroclix game and did some trading on Pokemon Go. Sunday I went out for lunch with a girlfriend who I only knew from online and we got to meet for the first time. Lunch turned into hanging out for many hours just chatting. It felt like we were old friends and not just meeting.

It was a great week for being active. I got my walk in every day (except Sunday, it was a rest day other than going for lunch). I was proud of myself for staying consistent and finding ways to get it in. Monday-Wednesday I walked after work like normal. Thursday I did a different position at work for a few hours that had me on my feet for 3 hours and ended up getting my steps in before I even left work – and that was a good thing because I was stuck there an extra hour and it was raining hard when I left. Friday my dad was picking me up after work to take me and my bro grocery shopping and then staying to visit and have dinner with us, so I knew I wouldn’t be walking after work. So I woke up early and got my walk in before work instead. Saturday is usually give or take if I get a walk in. This week was definitely a give when I was on my way to Jay’s the subway was closed for part of the trip and there were shuttle busses instead. I decided to walk those 2 stops I needed to go instead of taking the packed shuttle bus (definitely not interested in being in a packed bus without the ability to socially distance). I was planning to take the shuttle bus back when I was leaving but they were all so packed again and I was cold standing there – so I decided to just walk back as well. As a result I ended up putting in over 11k steps! Well above my daily goal of 7k that I normally have been doing. I’m still not back to doing the yoga, but I definitely will be picking it up again. My stomach/bowels STILL aren’t fully back to normal and it’s just so uncomfortable and I know would be worse in the yoga positions.  I’m just proud that I’m still doing the walking at least.

This has been a week of slowly decluttering again. Wednesday was garbage day and our bin wasn’t full. So I decided to take a bag and fill it with stuff to throw out. I also did a digital decluttering of leaving some facebook groups that were either not active anymore or just didn’t resonate with me anymore. I also unsubscribed from some company emails that I never read their ads and switched a few more things from my old tisme email to my new withemily email. This time was switching my banking stuff – so if you’ve got me as a contact for email money transfers or PayPal, you’ll need to update me in your contact list. 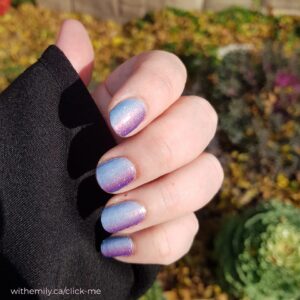 This has been a super busy week with the side biz. I was doing 2 different online vendor events as well as keeping up my VIP group. I sent out quite a few samples for people to try as well as thank you cards for orders. I felt like I was needing to stop by a mailbox almost every day on my walks! I also did a super pretty new mani. I love choosing what to do next and find myself changing them after a week, even though I know I could go longer. I really wanted to film tutorials but I didn’t feel up to it still.  Hopefully soon I’ll have my tutorial page up and going again as well as uploaded to YouTube.

That’s about it for me here this week.