So it’s hard to tell the numbers this last while because they’ve stopped doing PCR testing unless you’re in a high risk setting. They’re basically saying if you have symptoms to assume you have it and do the quarantine. Most things are locked down and closed again for 3 weeks, but that was extended 5 more days until the end of the month. This last week schools reopened for in person learning. So as of now, things will reopen again on January 31, with reduced capacity and restrictions in place.

So these 2 weeks I’ve been working from home. It feels so weird to not be going in to work. I will say it’s really nice to get caught up on everything and be able to do it without more and more daily work getting piled on top of it. Hopefully that means staying nice and caught up now that it’s all up to date. I will say that I’m loving not having to commute. Get an extra hour of sleep. Make fresh hot lunches. Work in comfy yoga pants. Just a few days of it left though, before going back in when we reopen in a week.

Even with being home, I’m still getting up and doing my daily yoga most days, except when having a rest day. I will say that not having the routine of getting up, dressed and out of the house has really messed with my walking every day after work. I really struggle with the motivation to leave the house without a purpose. It’s really so much easier for me when leaving work. It’s so much simpler to just walk a few bus stops before getting on the bus, especially when the tracker app say the next bus is 15 minutes away. No brainer to walk instead of stand there waiting. So I’m definitely looking forward to getting back to work to get back on track with the walking. Although to be fair, we’ve had really lousy weather while I’ve been home – either super below freezing temperatures or TONS of snow (we got about 55cm in 24 hours). I’ve definitely felt grateful for working from home through that craziness.

One of the things I’ve enjoyed while being at home has been taking little moments to do some extra cleaning and decluttering. I’ve been doing it in little bites – wiping down the front of the fridge while waiting for bread to toast, wiping the backsplash while waiting for water to boil for my tea, dusting the TV stand while lunch warms and so on. It feels like I’m spring cleaning with some of the stuff! Taking down curtains and washing them – unfortunately that resulted in one of the sets of curtains shrinking, so new ones ordered and waiting on them to get delivered, taking down light fixtures to wash the dust out of them and things like that. 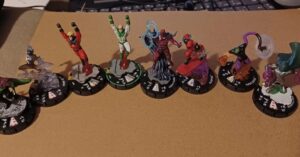 I was super excited that my Heroclix order finally arrived! There is one piece in the set that everyone is trying to get for competitive play, which means it’s going for quite a bit on the secondary market. It’s a Chase rarity, so difficult to get. I squealed with delight when I got it in my case! All this week after work, the kiddo and I played sealed games with the case and had a blast with it. The only thing we haven’t done yet is play the scenario’s in the miniature game. We plan to do that this week. Here’s my notable pulls from my case. I certainly can’t complain!

Also in the thought of Heroclix, there’s currently another online charity tournament going on. I was thinking of signing up and Jay even reminded me 2 days before about it, but I still missed the deadline to sign up. I was still debating what to play and when I finally thought about the version of the team I was going to use, I realized I was a day late. I’m thankfully still involved in it all though. I still donated to the cause (Epilepsy) and have been donating my time by being an observer and watching/timekeeping/passive judging. That way I’m still involved and getting to watch the games. If I had played, my team would have been 2x 30pt Flash, 1x 20pt Flash (TK), Mr. Oz, Sky Tyrant. High Evolutionary, Valeria Von Doom, Molecule Man, Scott Porter pog, WWE ring and All Black Necrosword. Although after chatting with some of the guys during the tournament, I now want to try a tweak of Felix Faust on it. Either get rid of Valeria OR Scott Porter, WWE ring and change All Black Necrosword to a 10pt object like a Power Gem. I’m going to have to play it out and try it, but I like the idea of it for sure. 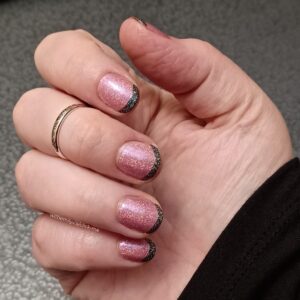 It’s been a fun couple of weeks with the side business. I unboxed the Valentines wraps live and got my rewards necklace (although I haven’t yet gone live to unbox that, I just know what it is. So no pic for that yet. I’m just ending a party for a hostess this weekend too. This month has been slow for sales though. I think it’s because of the incentive I put out last month, so everyone is stocked up from trying to win that. I do have a good incentive this month too, so hopefully some people jump in on that for the last week of the month. Right now there’s only 1 entrant, so the odds are great of winning. Check out the pinned post in my VIP group if you want to see what it is this month! I’m also loving my current manicure. It was my first time cutting strips and layering them and I can’t wait to do it again!

This week was also a therapy week. I’m glad that the last few sessions have been more on reinforcing my positive coping and not putting out overwhelming emotional fires. I feel like I’ve been on a pretty good streak of keeping things fairly under control and on the lower side of the spectrum. I still have times where my anxiety gets high, have sleepless nights and feel low with no motivation, but I’m able to slow it down and breathe. It sometimes takes me a few days, but I’ve noticed that sometimes I’m able to calm it to a manageable level more quickly. I know it helps that there’s nothing huge and pressing right now – even the pandemic doesn’t feel like it’s weighing as big as it did before. I’m glad to have the tools and the option of moving my therapy appointment to a sooner time if I feel like my tools aren’t helping me get to that more peaceful state.

That’s me these last 2 weeks. I had started to write last weekend and the week and day just felt like it went by so fast that I was just too exhausted to get this out there for my usual weekly one that it turned into another double week.