I don’t even know what to say about how the current state of the pandemic is. Stuff is open again but at 50% capacity. More than before, I’m noticing feelings of just ready to be done with it all. We’re only a few weeks away from this being going on for 2 years and we’re all so tired of it. I miss travelling and socializing. The hospital cases seem to be going down, so hopefully the herd immunity and severeness of it all is decreasing enough to live life a little more again.

Thankfully, with things starting to reopen, I was able to do some socializing this weekend. The 2 shops that have been doing some in person Heroclix events were able to run some sealed pre-releases for the set coming out this week. Both stores have a max of 10 people due to the restrictions, but I was able to get a seat for both events and friends were willing to help with carpooling to get to them. I really wish local stores were open with events, but at least these 2 stores just outside the city are. Saturday I pulled 2 rares and didn’t end up playing either of them on my team. Instead I went with uncommon Thor, Nova, Scarlet Witch and Black Widow. I went 2-1 and would have been closer to winning the day if my alpha had actually hit. First game was with Alex who is newer to the game. I was scared of his super rare Thor with hypersonic but I managed to get through him with the help of outwit. My next game was with Rory and my dice just wouldn’t fail on me – even though the 6’s I was rolling were making it more difficult to finish him off Blade. My last game was with Tom at the top table and as I said earlier, I missed my alpha, which would have taken out 1 of his figures to put me in a great position. Instead he was able to pick me off and take the win. On Sunday I pulled 2 super rares and played Destroyer, Scarlet Witch, Nebula and Lady Sif. Again I went 2-1. My first game was by far the most fun of the whole weekend and I couldn’t stop laughing. Mike was playing 2 Blades and again, I kept rolling 6’s, making them harder to KO with their rally dice. It got to the point that I kept probbing my own hits to try and get a hit without a 6 in the roll. He couldn’t do any damage to Destroyer and I took enough of his figures to win the game. My next game was with Jocelyn who had an Avengers team. She had Black Widow giving them all stealth, but I coaxed her out of it and took out BW so I could then see the rest of the team. It ended up coming down to Destroyer on his last click vs her Hawkeye with 3 clicks left and Black Panther with 2 clicks left. I had quake, hit them both, putting Hawkeye on last click and Black Panther rolled a successful super sense roll. She missed her attack back, which would have won her the game. I quaked again with Destroyer, this time getting them both to finish the game. My last game was with Jay. He got through my Destroyer really quickly. I picked off 2 of his little pieces and he got me down to only Scarlet Witch left. He didn’t want to just finish her off and wanted to win with mission points from prime Wrecker. I made him actually play it through and wouldn’t just concede the win to him. I had fun making him play it out even though he joked I was being cruel for it.

I can’t even begin to describe how much I needed this weekend with friends. Seeing faces, getting hugs, having laughs and conversations. I can’t wait to continue with it and do it more often again.

I was feeling low last week, didn’t feel up to writing. Not a debilitating low, but enough that I was struggling with motivation and wanting to do anything. It felt like a quiet week with nothing special to talk about and some pretty negative self speak about not feeling good enough for stuff. Isn’t that fitting with having chosen the word enough for my word of the year. The anxiety is also creeping back in.

Speaking of struggling with motivation, it also went along to struggling with movement too. Between the lockdown that sucked the motivation out of me, super cold temperatures, ice and my cell phone issues, it’s been a struggle. A friend reached out to check in with how I was doing and kickstarted me and lit a fire back. I am in a accountability group on Facebook with some friends who post about their daily movement and when she saw I hadn’t posted in a while, she reached out. I’m super appreciative of that. Since then, I’ve walked most days. I haven’t done the yoga in a few weeks and it’s mostly because of my cell phone issues and I don’t have room on the current phone for the app or the energy to bother downloading it and trying to remember the password, only to have to do it again when I get a new phone (more on that later). Writing it all out here though, real talk, it’s just excuses. I really should be sticking with it and picking it back up.

I’m still feeling overwhelmed with work. Darned imposter syndrome kicking in. So much on my plate and feels like no end in sight to getting it all caught up. Fingers crossed I can get some crossed off my list and get answers for others on the list that are out of my control. 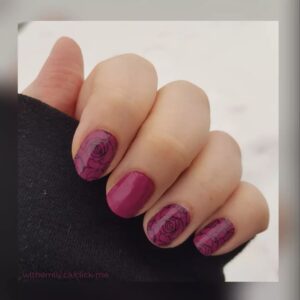 Side biz is feeling really good! I have done 2 valentines manicures since I last wrote and they’re both so pretty. I got another party booked and I’m having fun making the graphics for it so I can be ready when it starts in a few days. I also gave out samples to 2 people this weekend and had a conversation with someone who wanted some info on joining as a stylist herself. There are some great bonuses for joining this month, so hopefully that helps her make her decision to hop on board.

Lastly, my cell phone frustration. I’m pretty darned irritated. Beginning of January I bought a new (refurbished) phone. I’ve bought refurbished phones in the past and haven’t had issues, so I figured I’d go that route again and save some cash. It was fine the first few weeks. Then suddenly the screen started shaking/jumping, the touchscreen would occasionally stop working or turn black and the call sound for my recipient wasn’t great unless I used my headphone mic. I contacted the seller and said I wanted a refund. They responded that I needed to send them back the phone to assess if they were going to refund, replace or repair. I replied that it was unacceptable to be expected to be without a phone for over a week (between shipping and diagnostics), but they wouldn’t budge. I mailed it last Tuesday, they received it Thursday and it wasn’t until the following Friday that I got a response that they are refunding me. That’s 10 days. Now I need to figure out what phone to get and from where. I can tell you that I will not do it online again and will go to a storefront so if there are issues again, I can go in person for assistance on the spot. I’m also definitely going for something new in box and not refurbished. In the meantime, I had given my old phone away and ended up having to ask for it back to use for these few weeks. So it’s been factory reset and I only put on very minimal apps and haven’t changed any settings or done anything with it and it’s really irritating to have to again set up a phone. It’s so time consuming to get it all the way I want it to be, especially when I just did it a few weeks ago – which is why I don’t want to do it to this temporary one when I know I’m going to have to do it again with the new one.

I think that’s about it from these last 2 weeks. I’m tired and may be missing stuff though, but I don’t want to go longer than these 2 weeks.