It’s been a while since I’ve had a tournament report to write!  I’m back with another Vulture team.  This time, it’s a theme team – thanks to the new Steve Rogers welcoming him into S.H.I.E.L.D. Here’s the current version I’ve been playing around with. Vulture, Steve Rogers, Fixer, Phil Coulson, S.H.I.E.L.D. Diplomat, Everett K Ross, Pym Pocket Tank, Octopus Arms, Bloodaxe and ID’s – Cyclops x2, Jean Grey student, Magneto bounty, Iceman faculty. 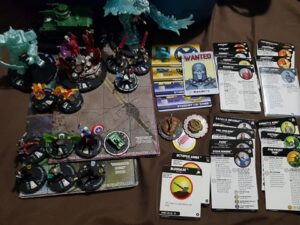 I won map the first 3 games and the last game.  I always chose Genosha. When I won map, my first turn set up was always:  TK the Octopus Arms into oblivion so Phil Coulson could remove 2 tradecraft tokens for Vulture to equip them without taking an action token. I Sidestep 0 squares with Vulture to pick up the light object.  Perplex up defenses and stay put. My 2nd turn was always: Use Phil Coulson’s last tradecraft token to KO the light object that Vulture picked up to give him Precision Strike for the turn, Perplex up Vulture to a 14/5 (unless my opponent split up the team so much that I need some into movement – then the ones in damage go to movement instead.  I try and keep the 14 attack so I’m more likely to hit and keep going), Fixer pushes to TK Vulture up 6, Steve Sidesteps and calls out Magneto who Sidesteps then TK’s Vulture up further as well as uses that 1 square placement, then Vulture Sidesteps if needed and goes in for the Charge/Flurries.

I’m going to apologize for forgetting details.  I didn’t take notes this time, so I’m going on my terrible memory.  It was so bad that I had to ask some of my opponents what their teams consisted of!  So this is the best of my recollection and if any of my opponents are reading this and I’ve left out a key moment, feel free to jog my memory and I’ll update it!

Round 1 I was playing against Brandon who’s team was 110 UC Thanos, Sheriff Strange, Jason Wyngarde, Q Prime, Carnage, Stark Tower map bonus. Usual set up for me, which means I got the alpha off.  I wasn’t able to get Jason because he rolled Shape Change and I couldn’t hit Thanos I think.  I’m pretty sure I only got pogs, Carnage and Sheriff Strange in the alpha.  He got Vulture, either Phil or Fixer and the Diplomat.  I called out a Cyclops and Perplexed him up and was able to get Jason when he missed the Shape Change this time, putting me a little up on points. About 30 seconds before last action, he takes out Everett which puts him up and I lost 163-146. So close and so fun. So starting with a loss, 0-1.

Round 2 my opponent was Ryan and this was another great and super close game. He was playing 160 UC Thanos, Trader, Q Prime, Groot, Flora.  Usual set up for me.  He brings Thanos almost right to my starting area, between TK and moving. I ignored him and went for all the guys in the back. Through the game, I’m able to get everyone except Thanos.  I got a few clicks off of him and got him to the point that 6 damage, if he doesn’t roll Impervious, will KO him.  He got Vulture and again, either Fixer or Phil and Everett so he’s up on points.  My only way to win is to get through his Thanos.  Finally, one of my attacks both hit and he missed his roll out to get me the win. I won 299-143. This brings me to 1-1.

Round 3 was against Aaron. He was playing Starro, Groot, Q Prime, Trelane, Oz, Dark Phoenix, Groot.  Vulture did Vulture things this game.  I did my equipping.  He tk’d the bloodaxe into oblivion.  I got up to his team and just ate through it.  None of his roll-outs worked for him, except for the Walking Woods, but even the dice manipulation couldn’t save him.  I felt bad for it being such a quick game and look forward to playing Aaron again another time. I won 299-15. 2-1

Round was with 4 Connor. He had a SHIELD Vulture team too, but his had no Fixer and used 3 Diplomats and a Sharon Carter instead with the Spin ring and less ID cards than me – Jean Grey (Phoenix) and Psylocke. This was my first time facing a mirror match and I’m so glad I’ve at least run through it in my head.  He wins the map roll. He also chooses Genosha.  He got his Octopus Arms the same way I do but with the Jean call in for that TK and also got his Spin ring to give to Phil.  I got my Octopus Arms and then called in Iceman off the faculty ID card to inspire Barrier and 2 of the lil guys used Barrier to get it around the whole team, with Iceman in the back corner (I took a screen grab of the set up, pretend the hindering is barrier – I didn’t have a barrier picture out so I used the hindering one and he knew what I meant).  If he could get to my very back row, he’d be able to use giant reach to get Iceman and then he’d be able to get in to my team, but he only had the 1 TK and even if he got the 2nd Sidestep plus the 1 square from Spin ring and Perplex +3 move, he was still 1 square off.  This means even as 2nd player, I was able to get my alpha off and chew through his team. I won 300-13. 3-1

Round 5 was with Jay.  We joked and called it another practice game because we play each other so often and knew that we were both most likely going to make the cut (him for sure, me most likely, even if I lose). He was playing Lockjaw, Q Prime, Dark Phoenix, 4x Flora, Groot, Oz, Tank. I lost map and he put us on the ROC water map.  I hate this map.  He TK’d up Lockjaw, called out Jean and TK’d away my Octopus Arms (not blowing them up so I couldn’t Phil them).  I equipped the Bloodaxe and Perplexed up defenses.  He calls out something to tank my team – targeting the Leslie pog and hits the whole team.  I KO the tank with a call in Cyclops so he can’t retal.  I try and get Vulture off but he makes me miss with Q’s die.  He gets Vulture. I manage to take out Mangog and nothing else. I think I did everything I could, but Jay plays his team fantastically so I lost 300-93. 3-2 and end up in 5th seat after Swiss so on to the top 8 cut!

Top 8 I’m facing Lucas who’s playing Immortal Hulk, Sheriff Strange, Etri, Trisentinal, 2×2 Magneto, Oz.  He splits up his team, leaving Trisentinel, Magneto, Oz in the starting area and puts Strange and Etri up on the elevation and TK’s Hulk up who then moves to be up near my starting area.  I ignore Hulk and first head over to the starting area with Vulture and take out all of them and then up to the elevation to take out all of them and then have enough movement to get back to Hulk to try and do a little damage to him.  I’m in a good position but that Hulk is super hard to get through.  He takes out my pieces one by one (in some cases two by two with the flurry) and I miss everything I try and do to him.  I just didn’t have enough damage.  Congrats Lucas for continuing on to top 4. I lost 300-185.

Thanks everyone for the games! I’m so glad we’ve got roll20 to keep playing while we’re all in isolation.

Until next time, xoxo (virtually of course for now)