How’re you all holding up out there? I’m feeling about the same. Still pretty anxious but trying to stay busy and pushing through. I’ve been spending a whole lot of time in isolation on my own in my bedroom. I’m finding I’m having trouble falling asleep quite a bit lately. For instance, it’s 4:38 AM as I write this first part of the post. Fortunately, I’m able to sleep once I fall asleep – it just means I’m sleeping half the day away. Because I’m feeling pretty low, I find myself sleeping for 10-12 hours. I suppose that’s alright for now, seeing as I’m off work and my body must need it. I just need to get it back to a fairly normal time before it’s time to go back to work… whenever that ends up being.

I’m still working on writing up a bunch of cards to send out with samples to friends, customers and team mates. I’ve got about 25 written so far and about another 75 more blank ones available on hand, so I’ve got lots to keep me busy there. None of them have gone out yet as we haven’t done a grocery run yet to drop them off, but it’s not like people are expecting them, they’re going to be surprises. I’ve been connecting with some new people as well and will be sending cards with samples out to them too, which is awesome! 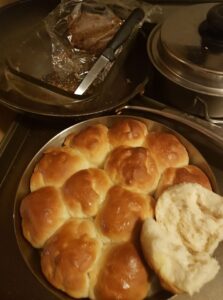 I took some time to bake again this week. Banana bread. I do love sweets and I love to bake, so it’s been a great way to use some of this time and also have some more stuff around to fill bellies and have a little treat as most of the shopping is concentrating on the necessities that can be found. I also made some dinner rolls to go with a chicken and vegetable soup that my brother made and they were a huge hit and everyone asked me to make them again for when we have the leftovers for dinner in a few days, so I’ll be making them again.

A friend invited me into a Facebook group for self care so I’ve been participating in that group.  For this first week we did a short meditation and made a note of where we are currently mentally and also a list of little things we want to make sure that we do for ourselves.  I have committed to increasing my water to stay hydrated because I’ve slipped back on that.  I also put on my list to make sure to take my vitamins and antioxidants.  And I also put on the list to move my body.  Even if it’s just a couple sit ups or doing a plank.. something that’s more than just sitting on the couch or laying in bed.

A mindless passtime I’ve started is playing Animal Crossing on my son’s Switch.  He’s playing so I’ve got a house in his town.  He’s pretty much done it all and is designing it the way he wants it, so I’m just doing what I call “filling the poke-dex” even though I know it’s nothing to do with Pokemon.  It’s basically going around and fishing and catching bugs and trying to come across them all.

That’s really about it.  Just staying home and not going out at all.  Hoping the weather gets nice enough soon that I can start opening my bedroom window and maybe sit out on the back deck a little.  I haven’t done quite as well as I tried to do on staying away from watching the news.  I’m still getting about 3-4 hours a day, when closer to 2 would be sufficient.  But 3-4 hours IS less than having it on all day.

I wanted to end with sharing a YouTube video of one of my good friends who put up a little thing on her channel on mental health and it had some points that hit home to me.  Especially the little half smile.  Give it a watch and maybe it’ll have some pointers for you too if you’re struggling as well.