Day 2 isn’t a ton to write about so this post will cover Day 2 and Day 3 of Origins Game Fair, 2019. If you’re starting with this post, check out Part 1 here.  Tom and I decided to try some grinders today. We both had various ways to qualify but wanted to save them for other events. We’d both won a WKO in Canada and we could use that qualification for US Nationals if we wanted.  We both also have 100+ ROC points, which would also get us into US Nationals.  However, if we got in with a qualification (or top 16 from Sealed Team US Nationals), we could keep our Canadian WKO for Canadian Nationals and we could keep our ROC points towards Worlds.

So we both sign up for our first grinder and don’t we get paired round 1 again?  Typical travel pairings, lol. I’m still running my Vulture team and Tom was running a Black Adam Mystical team. Another close game for us with Tom winning.  I don’t remember the exact score but it was within about 20 points.

I signed up for another grinder as Tom continued on in his first one.  The reason that day 2 is so short to write about is because I completely forgot to take pictures of my opponents sheets for this grinder so of course, I forget the specific teams/people I faced, sorry!  The only things I remember from this grinder is: Round 1 was against Howard, who had yet to face a Vulture team so he was happy to see me go off, even pointing out something I could do that had slipped my mind. He had a Black Panther (ABPI)/Hawkeye team and I got through the whole team in 1 turn and left him with only a 1/2 alive BP. Round 2 was against Kalder Ness from Dial H for Heroclix podcast and we had a blast playing – he had a Captain America, Resilient on his team and I managed to kill him to get “stupidness”, he had a great attitude despite losing. Round 3, I’m sorry I don’t remember his name and thank you to Jay for helping me remember the bones of his team.  It was a really neat Hawkeye/HYDRA Cap/Coulson build with a Christmas Present.  He gives the Christmas Present to Hawkeye and rolls for the free Incap.  Phil Carries across and he free Incaps me to start the Hawkeye chain.  Thankfully, he had put us on the underground and could only see a few of my people with how I had positioned. 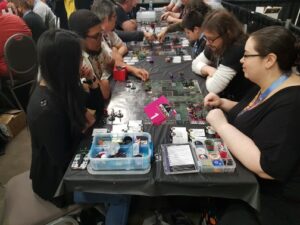 Because he was so close to me, I was able to get my Vulture off without a tk and went right through his team in 1 turn.  He really surprised me tho with his trick and I definitely didn’t see it coming.  Kudos to you sir! And with that I won all 3 rounds of the grinder, making me triple qualified!  Yay!  I can save my other qualifications!  After that I just signed up for another battle royal to pass the time as Tom played in another grinder and got put into a pod with my girl Nancy! 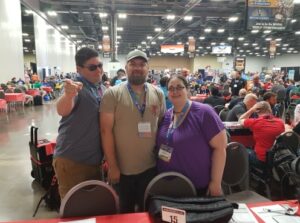 In the past I’ve always been on a team with my other Canadian ladies, Amber and Aja, but I was the only one of us going this time.  Tom’s team also wasn’t going either, so we paired up and found a random 3rd new friend to join us.  We found Brian on Facebook when I put up a post looking for a 3rd.  We played a little on Roll20 to get to know each other and then had a group chat to talk a little about our play styles and come up with a team name.  Because we were part Canadian and part American, we decided to call our team NAFTA. 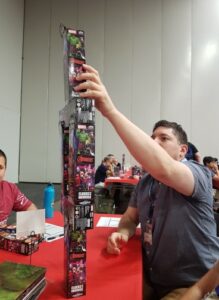 We get handed our 6 boosters and Tom carries on the tradition of building the tallest structure with the boosters possible. We get the go ahead to open the boosters and shocker, we pull a chase Red Skull!  I’m super excited to see it there because I just played with it twice and I always do better with figures I’ve touched before. We also had a Challenger, Runner, Task Master, Voyager and Astronomer.  Lots of good stuff to work with.  We tried to see what we could make with either an Avengers or Wakanda theme and didn’t see anything too stand-out. 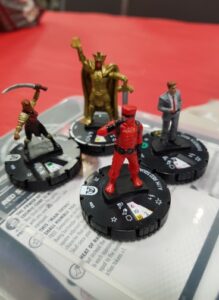 We settled on 3 teams that we thought were the best we could create.  1 a Challenger/Runner team.  2 a Astronomer/Voyager team that we gave the Cosmic Cube to.  3 a Red Skull/Okoye team.  Tom had the great suggestion of each writing down our choice of team we’d prefer to run out of the 3 and surprisingly, we had all chosen different 1st choices, so we all got to run our preferred team with no argument.  Not surprisingly, I chose the Red Skull team.  For this tournament they’re doing 4 rounds of Swiss rounds, taking the total individual wins combined together… so we need 8 wins between us over all rounds to make the cut for sure.

Round 1 was against Kyle Mitton.  He was playing Challenger, Ebony Maw and AIM Red.  I won map and put us on the Underground.  I creeped up with my team but kept them back and blocked paths with the War Rhinos. I tried to keep him mostly tied up, away from his special markers with the pogs for most of the game.  I was able to really hurt his Ebony Maw with his own Challenger when I rolled a successful super fun leadership to Mind Control him and then finished off the Ebony Maw with a pog.  I went in for a single target pulsewave on his Challenger with Red Skull but missed my attack.  He got an attack off back.  I rolled another leadership, which I used to move him away from my team then moved my Red Skull further away so he couldn’t finish him off.  Once he was away, I got more War Rhinos in his face and also created the Artifical Being pog for him having attacked me, knocking him to his Stop click.  He attacked everything in sight, which was only pogs.  I brought more Rhinos in his face but couldn’t finish him off when time was called.  I won, and my team mates also won all their games too, so that puts us at 3-0.

Round 2 was with David Newmark.  He was playing Black Bolt, Voyager and Iron Man. I won map again, putting us again on the Underground.  Same set up with creeping up and blocking paths with Rhinos.  He creeped up a bit himself.  After a turn of both of us clearing he decided to come go for it.  He tk’d Black Bolt up to shoot Rhinos and Red Skull.  Then he came to follow up with Iron man and I rolled out. That roll out was a clutch moment for me getting ahead.  I ended up getting Black Bolt down to his last click and while he was there I rolled a successful leadership and mind controlled him to go over and kill his Iron Man then followed up to take out Black Bolt. After that it was just taking out Voyager for the win.  Tom also won his round but Brian didn’t.  We’re sitting good at 5-1!

Round 3 was against Dan Harbury. His team was Black Bolt, Runner, Gardener and Wakanda Scientist.  Here we go with another Black Bolt.  Dan wins map and puts us on The Great Mound.  He keeps Runner back in the starting area and brings Black Bolt and Gardener up on the elevated.  I inch up a little and run Rhinos up the elevated.  Every turn Gardener makes a new square of hindering blocking various stairs every time so it makes it difficult to get to him the longer the game goes on.  He keeps taking out Rhinos as fast as I can make them, but it keeps him held up away from the rest of my team as we inch up.  I am able to knock his Gardener to regen and he heals back up.  I think I went after him with another Rhino and got him. He comes in with Runner for an attack on Red Skull. I get a successful leadership then Mind Control on him and go take him up to Black Bolt for an attack and to get him away from my guys.  Then because he had attacked Red Skull I was able to create Artifical Being by him.  Between the Artifical Being and a Rhino I hurt them.  He came down and tied me up and after some missed rolls I finally hit to take him out.  I was the only one of our team to win this round putting us at 6-3.  2 of us need to win in the last round to make sure we make the cut.

Round 4 was with Chad Birdsall. He was playing Voyager, Possessor x2 and Collector. He wins map and puts us on Amok Time.  His Elders are all sad that they don’t get to heal to click 0 because I don’t have the cube on my Red Skull.  I keep my team back around the blocking area near my starting area and keep making Rhinos that I keep moving into the middle of the map.  He eventually moves someone up and I hit them with Red Skull getting the Enhancement from AIM.  I’m pretty fuzzy on the details of this game but I’m pretty sure he gets my support guys but I’m able to take out his team.  Thankfully Tom also gets the win on his game which gives us the 8-4 we need to make it!

We end up 11th after the cut.  My opponent for Round 5 was Jaylen Major.  We’ve been at other tournaments together but this is our first time facing each other.  What a great kid, our game was so fun.  He had, surprise surprise, another Black Bolt along with Falcon, Iron Man and Shield Diplomat.  He was terrified of my team, as I was his.  He had way more mobility than I did and he put us on a map with a ton of hindering, Poison Ivy’s Greenhouse.  He stays back turn 1 and perplexes up defenses.  I make Rhinos and move them up the map in the only 2 clear paths and sidestep up the others. He makes a comment about hating playing sit back but stays near his starting area.  I side step a little more and clear Rhinos.  He says screw it and brings in Falcon for a suicide mission to get the fighting started. I take the bait and knock his Falcon to Stop then he comes in with the rest of his team.  He gets the hit off on Red Skull to get him off Invincible so he can psychic blast him.  He’s the first person to get through my team.  My opponents lose as well and we’re knocked out.

I’m thrilled with how well we did for making the cut.  Making the cut also gave us all a qualification for singles the next day, so we were all way over qualified now, lol. We also all got a full set of the new Mandarin Rings as prizing so that just put it over the top in terms of excitement.  I really wanted to collect all of them. Thanks for being awesome team mates Tom and Brian! Truly a pleasure playing with you both. 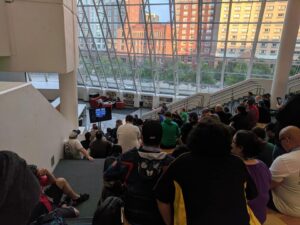 Later that evening was the Fan Appreciation night where we got to see some sneak peeks of upcoming products.  I won’t go into detail of those previews here – there are lots of Facebook groups and podcasts with all those deets already.  As much as I’m not a wrestling fan tho, I’m excited to try out some of the new mechanics that are coming with that new set!