Here’s the main event! US Singles Nationals! If you want to check out the Newmark Ultra Chase Thanos event, that’s Part 1 and Team Sealed is Part 2. I apologize in advance for the lack of pictures in this part, I was too distracted to grab some!

I was playing my Vulture team.  The current version if it is: Vulture prime, Unseen, 3x Big Tony’s, Lockjaw, Groot, Octopus Arms, Remaker Mandarin Ring, Joker’s Gas Canister, Firestorm Trouble Alert and ID’s of Wolverine Bounty (SR), Cyclops Student (SR and Uncommon options) and Faculty (SR), Harley Quinn (Title), Jean Grey Student (Chase) and Iceman Faculty (Chase and Uncommon options).  Even tho I almost never win map because of being non-theme, my map options were Ha-Ha Hacienda, Amok Time and Earth X Wakanda. This team is very close to the team that I won an Online Qualifier with, so I’m very well practiced with it.

There are 128 players and it’s announced that there will be 5 rounds of Swiss with a cut to 32.  Top half will get a qualification for Worlds in September in Memphis.  I make this my minimum goal to shoot for because I’m hoping to be able to make it so I’d love to show up and play side events instead of having to grind.

Round 1 my opponent is Mike Holloway who was playing undying with Haha Joker, Trelane, Groot, Daredevil, Lockjaw and IDs (all the teams I faced had the standard found ID cards, I just haven’t written them all out). Thankfully I’ve practiced with Jay a bunch against undying and this was an easier team to score some points from than some of the versions out there.  I knew that I needed to get the Groot and Trelane with my Vulture send out, ignoring the rest of the team for the moment. He smartly kept those back in the starting area and brought up the threats I couldn’t one shot.  I ignored them for the moment and just side stepped up until I could get up to him.  I got Groot then went to Trelane.  He rolled a successful super sense roll on the first attack but missed on the 2nd, so I’m up 70 points, more than Vulture is worth, so I’m good with that.  I know my Lockjaw and Unseen are difficult to KO, just as his Lockjaw and Haha Joker are, so I knew I needed Daredevil to secure the win in case he got all my Big Tonys.  Thankfully I was able to do so with multiple attacks from Walking Wood flurries and Big Tony’s all attacking to try for 6’s, which I managed over just 3 or 4 attacks, it was a relatively quick Daredevil KO.  I called in a Cyclops on the next turn to finish him off.  Time gets called and I’m up on points for the win. 1-0

Round 2 is with Joe Pape who’s team was Lockjaw, Uni-Mind, Groot, Flora, and Invisible Plane Terrain. He joked that he never wins map, we roll off and I actually won map!  This never happens.  I put us on Ha-Ha Hacienda for the extended starting areas. He stays back in his starting area.  I get over to his starting area with Vulture and take out Flora, Groot, Leslie, Walking Woods and leave him with just Uni and Lockjaw.  In the process of my taking out all the 1 click things though, I managed to crit miss not once, not twice but THREE times!  That’s 3 attacks that I’m not able to make on his Uni to try and get him popped.  He called out something to KO a very hurt Vulture from all the crit miss damage and poofs so I can’t retal. I take a clearing turn. He moves over to be next to his terrain to make my range attack call-ins more difficult/impossible on choosing stealth some turns.  He’s up on points now so I don’t think he attacks at all the rest of the game so I can’t retal. He’s up on points so I know I need to pop Uni to win at this point.  He looked at me a little funny when I use Tony’s to perplex up a Walking Wood to a 12/4 and then I could see the moment when he realized that I was going to choose TK with Lockjaw to get him in side step position. I Flurry him successfully to get him off Invincible.  I tried a Cyclops call in to follow up and try to get through the Imperv but he rolls Shape Change.  Next turn I call in Wolverine and get him to Stop.  He regens 2.  I call in Jean and hit him back to Stop again.  Time gets called before I have a chance to try and pop him. 1-1

Round 3 is against Zachary Shourds playing almost exactly what I just played except he had the Dune buggy instead of the Invisible Plane. He wins map and puts us on Stark Tower, which he’s paid for the map bonus. He made Walking Woods and crept them up the map. He rolls with Lockjaw to try and make a pog and gets Bolt. He hypersonics with Bolt on a Big Tony, the only thing he could reach.  I sidestep and clear.  He moves a Walking Wood even closer. Because of moving his Walking Wood up, I didn’t need to use TK to get Vulture back to his team.  He thought the Plasticity would stop me, not realizing that Vulture ignores characters.  I make my way to his starting area and KO Flora, Groot and hurt Uni, but not enough to get him to Stop.  He calls in Jean to shoot Vulture.  He perplexes damage to 5 and hits, putting Vulture on last click. He uses the free TK to move Vulture to the edge of the elevated so his Uni/Lockjaw can now see me.  He shoots with his Uni – crit miss!  Putting himself onto Stop.  He brings in Firestorm who misses.  I have a token, so I’m not able to move Vulture out of the way or I’d push to death.  Because he kept Jean on the board tho, I’m able to retal.  I use Tony’s to perplex Groot to a 12/4 but I miss by 1 to KO her and then don’t get to make my Walking Wood to try and pop Uni.  I don’t have Unseen or Lockjaw close enough to do anything so I just move them up closer to help for next turn. If you’re keeping track, I’m up right now … 33 to 8, with Vulture on last click.  He chooses to call in Iceman, for a group pulsewave, with his own guys in the group to be hurt as well.  He hits and it takes out Vulture and time gets called.  So close! 1-2 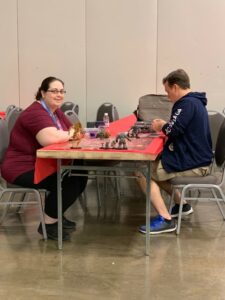 I lost map and he put us on Amok time. He moves up Unseen, Starfox and Collector who steals my Octopus Arms. He didn’t have Unseen in hindering, so I take the opportunity to call in Cyclops, perplex his damage to 4 and he didn’t get super senses. I think I attacked something with a Walking Wood because his Groot was in the middle of the map in the mix of things. His Starfox flurries on Vulture, hitting the first attack but missing the second attack.  I pick support with Lockjaw and roll a 6 on my support roll, putting Vulture back up to top dial.  I then charge with Vulture to KO Groot then make my way over to Starfox.  I’m successful with hitting him and he doesn’t get super senses. Without the arms for flurry, I choose to knock him back from the super strength into blocking to KO him, even though I know I don’t get to continue with another charge, it was worth it to score those points. I think his Collector was double tokened so his only move left was to call out Rusty with Oz but he missed with the Rusty attack as time was called.  I’m now sitting at 2-2 and need to win the next game for my goal of top half for a Worlds qualification.

Round 5 is against Tommy Lytle who had a Mystical team of Daredevil, Black Adam, Sheriff Strange, Billy Batson (20 pts), Tri-Sentenal and Invisible Plane Terrain. This was such a fun game, Tommy has a fantastic attitude.  He wins map and puts us on the Prison Tier.  He keeps himself hidden in rooms and because of where he’s placed the Invisible Jet, it takes me an extra turn to grab and equip objects.  We both take quite a few turns of side step type positioning, him staying way back in the corner eventually.  I finally get to a position that I can pull of my alpha with a Jean tk call-in, which means no extra perplexes from my usual Harley call-in.  I get into the corner into the only space available that he leaves me with and I take out both Tri-Sentenal and Billy but miss Black Adam. I’m up on points now, 50-6.  He hits Vulture down a few clicks and then brings Black Adam out into the middle of the room to try and kill my Jean that I wasn’t able to poof away.  He misses the attack!  I know Vulture is about to die so I push him to try another flurry but Sheriff Strange rolls his super senses.  I choose running shot with Lockjaw and rolled a 2, giving me +1 stats.  I use Tony’s to get Lockjaw up to a 12/5 and hit Black Adam!  Because of the Mystics from hitting him, I retal with Groot but I miss the attack and realized that I made my first glaring mistake of the day with that placement because I couldn’t see for Unseen’s prob, darn it!  That would have been a dead Black Adam if it was a successful hit.  He’s able to take out my hurt Vulture on his next turn bringing him to 56-50 and then time was called.  Such a close game! 2-3

I end up 80th out of 128 players.  I’m super proud of how I played and the choices I made.  Other than that 1 positioning error, I feel like I really did the best I could do.  Any of these games that I lost, with 1 more turn or 2 more minutes, I feel like I could have potentially won any of them – they really were all just that close.  As always, I had a blast in every game.  Laughing and having fun, while keeping it serious and competitive and I’m so grateful that all of my opponents had the same attitude.

Huge shout out going to Wizkids, organizers, judges and volunteers for making this an amazing 5 day event.  Everything felt smooth and really well run and I enjoyed myself every single day.  Now to prepare for Canadian Nationals in a month and see how the meta shakes up and changes post rotation. Do I stick with Vulture?  Do I try and get a new idea I’m working on to work?  Practice will let me know!