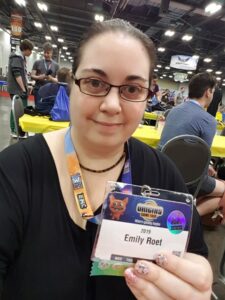 Here we are, day 1 at Origins 2019. The convention was open from 12-6 today so we went a bit early to grab our badges and generic tokens.
I’m super impressed with how registration was run. The lines all went so fast and easy that it took almost no time at all. I decided to spend the day playing battle royals and made it into 4 games. I cant believe the haul I ended up with when I was done. I was the chase queen today! Game 1 I won and grabbed the LE Ambrose Chase. Game 2 I got one of the new mandarin rings. Game 3 I pulled and won a chase Red Skull. Game 4 I pulled another chase Red Skull and managed to win him too, even tho I came in 3rd because we also had a Kobik pulled in our pod (taken by the winner) and the person in 2nd wanted the Rogue that was put down.

In the evening I was signed up for a super cool side event that was put on by a really sweet and generous heroclix player David Newmark. 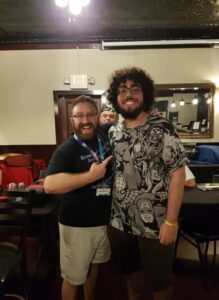 He rented out a venue, had it catered and was giving away an Ultra Chase Thanos along with a ton of other prizing. The event was 400 points limited with stipulations. You had to have at least 1 common, 1 uncommon, 1 rare and you could only have 1 super rare. The team I was playing was 2x Medusa, 2x Overdrive, Karen Page, Duke Thomas, Shredder Clone, Suited Henchmen and Batgirl, Shadow of the Bat. It fit right along with my playstyle of in your face and smash.

Round 1 I was against Tom who was playing a mystical team with Witch Queen Le Fay, Jeanette, Shredder Clone, Billy Batson, Shredder Illusion and Raven. We’d practiced the night before in our hotel room (yes, we got randomly paired round 1… doesn’t that always happen?!  Travel 9 hours to play against your locals, lol) and he knew exactly what map to take me to that would hinder my team, Prison Tier. He was able to protect himself in the rooms enough that I couldn’t get all the hits with my alpha strike off because I’d have to break walls to get into his team. It was a pretty close game, but Tom beat me out 140-95.

Round 2 was with Matt Donham who’s team was Medusa, AIM White, Captain Marvel, Photon and Nova. He won map and put us on my favorite *eye roll* map, Hedge Maze. Again, choking the areas that I could position for my alpha strike. Another game close in points with Matt winning 330-275. The funnest highlight was how Captain Marvel died. I had perplexed Karen’s damage to 2 and then got her adjacent to both Charged Up pogs for 2 empowers to make her damage 4 and he had theme probs left so I needed to hit an 8 or 9 3 times and did it! Next turn I popped out an Overdrive from a Charged up pog, perplexed up his damage to 2 and then got him next to the other Charged Up for empower to make it 3 and again, hit to KO her. We had so much fun this game and laughed so much.

Round 3 was against David. When we sat down he made the comment “welcome to your next win”. He was filling in a spot for someone who’d signed up but didn’t show. So he’d made a team on the spot with pieces he had on him. He played Mr. Oz, Voyager, Thor, Astronomer, Veronica Kale x2 an Nico. He crit missed on map roll and it only went down there. He moved his big attacker, Thor, up the map with a tk so I didn’t have to move too far out. I used Batgirl’s plot points to use outwit on his defense then free Charge to take him down a few notches and finished him up with the Living Hair, getting enhancement off the Charged Up’s/Duke, hitting for 14/5. From there I cleaned up the rest of his team. He did get Karen and the Suited Henchmen from me and I won 395-25. 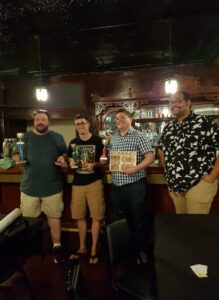 Tom made the top 4 cut so I stuck around to watch the final games. Congrats to Rick for winning the event with his Medusas/AIM team!

Such a fun event!  It looked like everyone was having a blast, even with such high stakes on the line.  David said he’s putting it on again next year, bigger and better.  I can’t wait to see how it evolves and would love to participate again!