Stay at home order is officially lifted this week but it really doesn’t change much. The lockdown is still in effect and we haven’t moved into any phase of re-opening yet. You still can’t connect with those you don’t live with. They also voted to extend emergency orders to December so the provincial government can put more measures in place if needed. The projected stage 1 is supposed to be June 14 but it doesn’t sound like that date is set in stone. 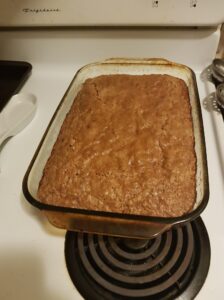 I did something this week that I haven’t done in quite a while, I baked banana bread! I really enjoy baking but I haven’t felt the drive or motivation to do much of it lately.  I just couldn’t let these bananas go to waste though.  We got a bunch on the last grocery delivery and they were green, so we waited for them to ripen. However, they went from green to super spotted, over night.  There was no day of yellow perfectness for eating, so into banana bread they went. Because it was a whole bunch, it was enough for 2 loaves – but I only have 1 loaf pan. So instead, it turned into a 9×13 pans worth and we’ve been enjoying it for days. I was asked for my banana bread recipe before and you can find it here if you want to make it too.

I started this week waking feeling blah and wasn’t feeling social so I’ve disconnected from the family and social media and just had a bunch of quiet time in my room for many hours before making my way downstairs and interacting.  I’m trying to keep on top of my self care so I don’t sink even deeper into a low time.  That’s part of what prompted me to actually do what I’ve said I wanted to start doing – the new self care page with more blog posts focusing on it.

I’m back also having trouble falling asleep again. Most days I’ve still been able to get a good amount hours slept, but the act of feeling tired and falling asleep has been difficult. I did have one day where it was really bad though and I didn’t fall asleep until 10am then woke 3 hours later at 1pm and then napped for 1.5 hours at 2 and that was it. You’d think I would be tired enough that night from that lack of sleep, but nope – I was still up past 5am that night too.  As much as it’s financially difficult being off work, I’m grateful that I can sleep these weird times when my body and brain are tired enough to be able to do it. Those last 2 weeks of good sleep were great while they lasted.

I’ve also not had the greatest week for moving body enough – the neck/shoulder kink is still there and pretty sore to move, but almost healed thankfully. As well, I *almost* slipped getting out of a bath and tweaked a knee just a little – it’s not terribly hurt, but enough that I don’t want to make any inflammation worse.  I have been doing well with the produce most days but I’ve also been stress eating, which means not staying within the calories I try and stay within. Bread and carbs have been my weakness this last little while and dang is it ever hard to cut back on those! They’re just so easy to grab and go.  As much as I keep trying to stay on top of all my goals, I’m human and and I’m here being real with you all.

In gaming and entertainment this week, I played the Pokemon Go Gible event and had some fun with Heroclix. I played with both Mike (online) and the kiddo at home. I like my team, but it’s not the greatest in the current competitive environment with all the swarm teams that out action me and all the barrier that makes it hard to take enough points because I can’t get through it and attack with only 1 person. So back to the drawing board and figuring out something different. I think I want to do something that can get through that barrier somehow.

I ended the week by helping to support a friend’s Kickstarter. He’s trying to collect funds for submission fees to film festivals for his creative works. If you want to check out what David is up to, here’s the link to his Kickstarter: http://kck.st/3hRdLR5

That’s me for the week!