I’m happy to report that my anxiety has been less (not gone though) this week and I got some productive stuff done, despite still feeling fairly unmotivated. I made it online to my VIP group to unbox packages and then demonstrate 2 of them. I did a mani live with gel strips and I did a facial with exfoliation and I can’t believe how soft my face is. It’s got to be the best product I’ve used for my face in a very long time.

My sleep has shifted a little. Still off, but different. I’m feeling more sleepy earlier, but still only sleep about 3 hours at a time and end up napping. Except for one day that I did totally crash and slept for a full 9 hours. I’m so glad that I’m able to just sleep when I’m tired and able to with no specific responsibilities right now. This would be terrible if I had to wake and be functional at specific times. 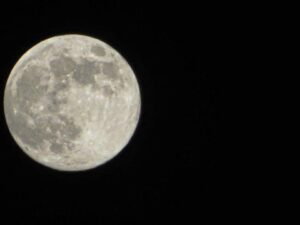 I’ve shifted my walking from videos in my bedroom to actually walking outside. I have been going outside in the evenings, after stores are closed so there’s less people on the streets. I downloaded an app to track my distance and have been walking 1-1.5k each night. The fresh air has been fantastic and I’ve really been enjoying watching the night sky as I walk. One of the nights had the Super Moon – and I didn’t even know it at the time. I just kept staring at it. I tried to snap a picture of it but my phone takes really crappy photos of far away stuff like that – so I asked my friends son, Brayden, to get one for me because he’s great at taking pics with his camera. 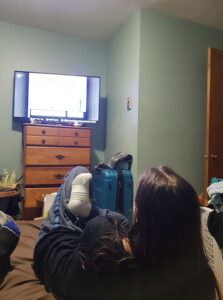 This week ended with Mother’s Day.  I called my mom in the evening when I went on my walk and we talked for a nice 20 minutes.  Then my son came to hang out with me in my room for a few hours and we played some games.  He knows I like the old school games like Super Mario 3.  Even though he hates that game, he indulged me and played some with me.  We bounced around a little and played some Mario Cart and Mario World as well and just had a fun few hours both doing terrible but just hanging out. It’s great having a grown kiddo who’s willing to hang out for a few hours and laugh and joke together.  It was fun remembering parts of the game from when I was his age and playing these same games and showing him a few things he didn’t know about and he remembered a few things that I forgot about.  I think I surprised him with being able to pass certain levels too.  We definitely need to do this more often. I’m glad he’s willing to share his Switch with me so I can kill some time in all this isolation by checking into Animal Crossing and play some Tetris 99 to pass the time.

That’s about it for this week.