Ever had one of those rock bottom moments?  I got mine this last time travelling.  A huge fear of mine.  Something that gives me tons of anxiety just thinking about it happening when I travel.  And for the first time ever, it happened.  I needed a seat belt extender.

I wasn’t even sure if I’d have the courage to hit “publish” on this post, so if you’re seeing it, I had to really talk myself into this.  This is the kind of thing that shames and embarrasses me and I’d normally never talk about it and just keep it to myself and pretend like it never happened and do everything I can to avoid it happening again.

In July, I traveled to Nashville for the first time.  I got up SUPER early to be at the airport for the required 3 hours early for international travel. My flight was at 7:30AM, so that meant leaving my house at 3AM to get there in time. Go through security and customs, no problem (except the extra manual check of my hair to make sure I wasn’t hiding anything in my hair clip).  Once I was through, I grabbed breakfast and waited the 1.5 hours to board.  My seat was assigned at the gate, 6F in zone 4. 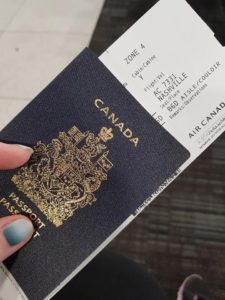 Zone 4 gets called and I make my way up.  It’s a little plane, a subsidiary of one of the bigger companies, with just 2 seats on either side of the aisle. I find my seat, 6F and there is someone already in the seat next to me.  I tuck my backpack under the seat in front of me and then take the seat belt and fully extend it before even sitting down. I’m fully aware that I’m a plus size woman and know that I always have needed most, if not all, of the length of the seat belt.  I push myself back as far as I can and squeeze myself to the back of the chair, suck my breath in and choose the smallest part of my hips, under my belly, and bring the seat belt across.  I can feel the metal touching metal.  I know I’m close.  I keep trying so hard to make it work but it wont. It feels like I’ve been trying forever, but I’m sure in reality it was less that 60 seconds.  I’m cursing in my mind and shaking my head to myself, mortified.  I’m thinking and envisioning everyone staring at me, but when I glance around to see where the flight attendant is, everyone is just doing their own thing and getting settled themselves.  In almost that same moment, the flight attendant is by my side and before I can even open my mouth to ask for an extender, she places one in my hand with a smile on her face and zero judgement in her eyes.  I was SO relieved for her compassion and forethought that it almost brought me to tears.  Heck, I’m almost crying just thinking about this while writing it all out.  I literally only needed 1 inch more. The metal was touching.  Flight attendant, I don’t know your name, but you have no idea how much you touched my life that morning and how much I appreciate how kind you were to me.

A few days later and it’s time to go home.  I get my ticket with a seat of 6D this time, same row as before, just the window instead of the aisle. When it’s time to board, I cringe as I’m stepping towards the plane and see that it’s the exact same model of plane that I had on the way up.  At least this time I know I’m for sure going to need the seat belt extender.  So as I get on the plane, the flight attendant is there greeting us as we step on.  I ask her for one before even entering the plane with a quick “I was on this same plane on the way up and needed an extender, can I get one now please”.  She did hand me one, making a comment about not being surprised because it’s a smaller plane, but it was nothing like I felt with the first flight attendant.  The vibe I felt disgust and annoyance.  I’m sure I read it wrong and was over analyzing.  She was probably just busy with taking off prep and a busy mind, but my anxiety likes to trick my brain like that.  But now, weeks later, I’m home and can rationally think on it, I’m sure that’s all it was.  I’m just so thankful I had the first experience that I did, handled the way it was, so I could go into this experience already knowing what to expect.  So I get to my seat, 6D and I’m thankful that the person who will be next to me isn’t there yet.  I take that time to tuck my backpack under the seat, extend the seat belt and attach the extender in privacy and buckle myself up before the other passenger gets there.  I’m feeling more cramped and squished in this window seat.  Thankfully I’m pretty tired and sleep for most of the flight so I don’t overthink and dwell on it all.

Back in Toronto we land.  Is this the push I need to finally get serious about losing some weight?  Have you successfully lost a bunch of weight and kept it off?  I’d love to hear what you did!

With the upcoming vacay to Vegas coming, I’ve decided to be brave and share my story here because I’m gonna be honest with you guys… I’m nervous and embarrassed to have to go through this again.  I am flying with a different airline – so I’m hoping for it to be a different outcome.  Fingers crossed!