Eureka! This week’s vaccine search is successful. On Monday, I got another newsletter email from the local politician that said there will be 2 pop up clinics for my postal code on Wednesday. One of them was a 15 minute walk from my house even and they were expected to get about 1000 doses of either Pfizer or Moderna. No appointments for these pop ups – only walk in, first come first serve for anyone 18+ with our postal code. Last week, we weren’t early enough and got turned away. So this time we got there for 5:30, 3 hours before the 8:30 start time – which means waking at 4:00am. There was already quite a line up at that point and I’d say there were probably about 300 people ahead of us. The weather was showing chance of rain by noon, so we hoped that it was going to go quickly once started – but we all brought umbrellas just in case. We brought a lawn chair as well, which I was really glad to have because my knee has been bugging me. I sat for the first 2 hours but was feeling chilly and wanted to move around a bit and just stayed standing after that and let my brother sit instead. My kiddo sat on the ground for a bit, playing on his Switch that he brought to kill the time with.

Around 7:00 a security guard came around and was counting the people in line. About 30 minutes later another one came around and counted again. A few minutes after that, they came around with these purple cards that they gave us to hang on to – once they checked our ID to confirm we were eligible with the correct postal code for the area. Around 8, someone came around and was asking what time we arrived at and how we heard about the pop up. When I answered that I got it from the NDP newsletter email, she replied that it was HER I got it from, that she’s the one who’s been sending them out. I’ve never met her before so I didn’t recognize it was her. That was really cool and neat to see her out in the community. She seemed thrilled that we’d heard about it because of her and I was glad to be able to thank her for sharing the information in person. Right after she moved on, a nurse came by and got us signed in on a tablet. We gave our health cards, confirmed our names and address, gave our cell phone numbers and email addresses. He explained that we would get our vaccine info by email and they would contact us by text and email with the information on getting our second dose by the end of August (Ontario is doing up to 16 weeks before the second dose so they can get as many first doses in for partial protection in more people). The second dose will be somewhere else with an actual appointment, so no needing to wait in a long line for hours again. 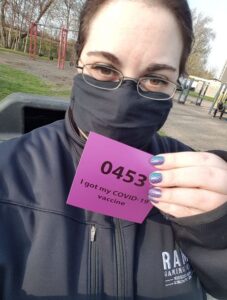 Right at 8:30, we saw the line start moving right away. Every few minutes, we’d get to keep moving forward. As we were nearing the tent, they told us to take out our health cards as well as the purple card they gave us in line. Unfortunately we had to turn in the purple card and they wouldn’t let us keep it, but at least I took my picture with it already. I got sent over to a nurse who was free and she looked at my health card and asked my phone number and to confirm my information. While she was double checking the needle and inputting the info into the computer in my file, she had me look over a sheet and asked if any applied to me (things like are you feeling unwell, have allergies to certain things, pregnant, etc) and I said none applied to me. I pulled my arm out of my jacket and sweater (I wore a tank top under my sweater so I was good to just pull stuff right out and she said she loved that I was prepared and got a smile from another nurse who was standing near too). I have a nervousness for needles… not all needles though. I’m ok with getting pierced and I’m ok with getting blood drawn. It’s needles where something is going into me that I freak out with. Things like IV’s or injections. I told her I was nervous and she prompted me to relax my arm. I looked away and felt a tiny pinch and within seconds it was over – it really wasn’t bad at all. As I was getting myself back into my sweater and jacket, she emailed me my receipt and info of my vaccine. She told me when I get home I can take some Tylenol to get on top of any symptoms that might come. I confirmed on my phone that I got it and she handed me a information sheet with the time I received the vaccine on it and directed me to go sit in the waiting area for 15 minutes.

My brother doesn’t have data on his phone so I needed to turn on the hot spot on my phone for him to check and confirm that he got his email as well. It took a few minutes, but we got it to work. We’d only been sitting there about 8-10 minutes when the guy managing the area rushed us out, even though we said that it hadn’t yet been 15 minutes. He said it was fine and it was so busy so he told us to go. That didn’t quite sit right with me and my brother and we gave each other weird looks, but we left – it was about 9:30, so nice and quick once they started. My knee was really bothering me, so we took our time walking home. When we got in, I did take the Tylenol, if nothing more than to help with my sore knee. The kiddo walked over to Tim Hortons and grabbed us all breakfast sandwiches and we just hung out watching some TV together for a few hours.  I sent a thank you email to the NDP politician for getting the info out – because if it wasn’t for her we wouldn’t have known that these were happening.

About 2:00pm I was feeling really tired. I can’t say if it was from having woken at 4:00am or a side effect of the vaccine at this point, but I couldn’t keep my eyes open any longer so I went up to bed and crashed for a few hours. I woke in time to join the family for dinner, but at 10:00pm I was exhausted again and went to bed. Physically, my knee is still hurting a lot so I put some ice on it and took more Tylenol, but that was pain from before the vaccine. My arm where the jab was is also very sore and I’m unable to sleep on that side to not put pressure on it. Other than waking to pee, I slept a full 9 hours until 7am and you all know how much trouble I’ve been having with sleep, so this is definitely uncharacteristic of me.

On Thursday, 24 hours later since getting the jab, I woke feeling really good, other than my arm still hurting. My knee also was still hurting, but not nearly as bad. Again, in the afternoon, I was so exhausted I couldn’t keep my eyes open so I had another 4 hour nap. Friday my arm was almost fine and only hurt when I touched it but I was still tired early and crashed, but it wasn’t a long sleep this time.  Saturday my arm was completely better and doesn’t hurt at all when I touch it anymore.  In the afternoon I had some stomach cramping and chills right through me.  I ended up falling asleep for a nap and then woke in sweats.  Sunday I woke with a headache at 5am and took some Tylenol, which got rid of it. When the Tylenol wore off, the headache was gone and I’ve felt fine ever since.  I hope that’s it and I continue to feel normal now.

I also had a therapy appointment this week.  It was on Tuesday, so it was great to be able to talk through my fears of injection type needles as well as some other personal stuff that revolves around confidence and sticking up for myself and avoiding confrontations. I had some moments of actually speaking my mind of how something made me feel as well as other moments of just staying quiet to avoid getting into a disagreement and needing to feel to defend my feelings. It felt like a really good appointment and for the first time ever, I went over by 5 minutes when talking with her. I’m usually really mindful of the time and respecting that, but it felt really good to know that she was willing and able to take that couple extra minutes.

I’ve done well still with my produce and calorie goals.  I didn’t get a ton of movement in the few days I felt unwell, but before the vaccine I did and I picked it back up Sunday as I felt back to normal. The sleep has been way off with the vaccine too as you saw above – but it is what it is.

I ended the week with a heroclix playtest session with a friend who wanted to test some stuff out.  I was hoping to have been able to play with the new Wonder Woman set that got released this week, but unfortunately our store has delayed shipment and it’s not due to arrive until later this week.

That’s about it for me this week. Feeling that sense of relief that an end will hopefully be in sight.